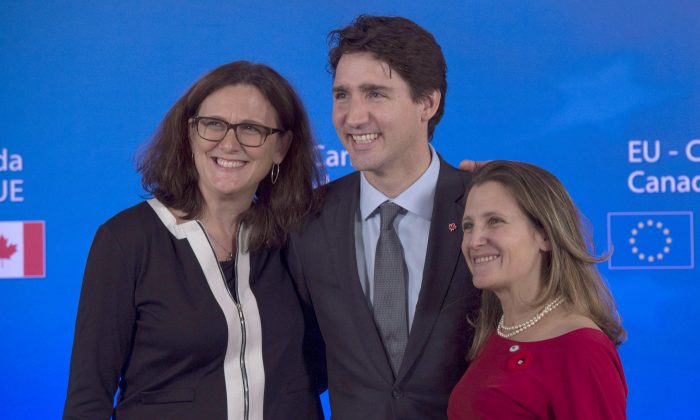 Canada could ratify CETA this week

OTTAWA—The chair of the House of Commons trade committee says he hopes Parliament can ratify the Canada-EU free trade deal this week before rising for the holiday break.

On Dec. 14, the committee began clause-by-clause consideration of the bill that would implement the Comprehensive Economic and Trade Agreement, or CETA, said Liberal MP Mark Eyking.

The bill, supported by the Liberal majority and the Opposition Conservatives, passed second reading Tuesday, Dec. 13—approval in principle, effectively—by a comfortable margin of 266 to 39.

“We’re moving fast on this one,” Eyking said. “If everything works well, we’re hoping to get it in the House before the break.”

The European Parliament is expected to vote on the agreement in late January or early February.

Spokeswoman Valerie Lawton says Therrien has provided preliminary recommendations to the government aimed at better protecting the privacy of people who participate in the MyDemocracy.ca survey in response to a complaint.

The MyDemocracy site does not ask respondents to reveal their names, but it does ask them to disclose gender, age, postal code, highest level of education attained, occupational work area, combined household income, first language learned, level of interest in politics and current events, and whether they identify as a member of a specific minority group.

EDMONTON—The fate of an all-party legislature panel is up in the air before it even begins looking at ways to keep children safe in government care.

Some opposition members say the panel proposed by Premier Rachel Notley’s government will not get to the root of the problem.

They say the panel needs more legislative teeth to ensure openness and to guarantee workers will not be punished if they come forward with information. They also say the minister in charge, Irfan Sabir, needs to excuse himself from the panel because some recent problems are tied to him.

Sabir promised the panel after it was revealed that there had been little action for two years over the death of a four-year-old girl named Serenity. The girl died while in kinship care.

MONTREAL—Elected officials in one of the last holdouts in North America when it comes to allowing right turns on red are urging Quebec to give the manoeuvre the green light.

A coalition of 15 suburban mayors on the island of Montreal is asking Transport Minister Laurent Lessard to look at changing the rules.

Montreal has routinely balked at allowing right on red, while the rest of Quebec has allowed it since 2003.

Montreal and New York City are believed to be the only jurisdictions in North America where right on red isn’t permitted, with the safety of pedestrians cited as the main reason for not allowing it.

Councillors passed a budget on Dec. 13 that includes a 0.5 percent increase in property taxes to support frontline service providers, including firefighters who have been seeing multiple overdoses per day.

The B.C. Coroners Service recorded more than 620 fatal drug overdoses across the province between January and October, about 60 percent of them linked to the deadly opioid fentanyl.

The city said in a new release that firefighters responded to 745 calls about drug overdoses in November, and crews had to use the overdose-reversing drug naloxone 35 times.