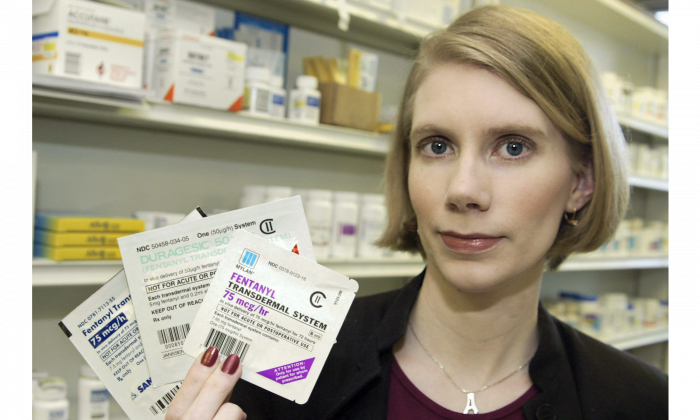 Amy Tiemeier, assistant professor of Pharmacy Practice at St. Louis College of Pharmacy in Michigan, holds up three different versions of the pain-relieving fentanyl patch on April 26, 2006. Trafficking in and deaths from the dangerous opoid has increased in Canada. (AP Photo/Tom Gannam)
Canada

VANCOUVER—The RCMP is working with the United Nations and China to dampen the influx of the dangerous opioid fentanyl onto Canada’s streets.

That information comes as health officials across Canada urge jurisdictions to collaborate to combat the drug linked to at least 655 deaths. A bulletin released by the Canadian Centre on Substance Abuse says fentanyl was determined to be a cause or contributing cause of the deaths between 2009 and 2014.

Sixteen people overdosed in Vancouver on Aug. 9 alone—including six in one hour—from heroin that police suspect was laced with fentanyl.

Fentanyl is a white powder that’s easily disguised, tough to expose, and in high demand by those with addictions, said Cpl. Luc Chicoine, the RCMP’s national drug program co-ordinator.

Chicoine said it’s being smuggled into the country in many ways, from inside shaving kits on passenger planes, to couriers, to gangs importing shipments in commercial containers. Police have been unable to confirm the drug’s primary origin.

Global investigations have been initiated as part of a group involving 35 countries, he said. China-based pharmaceutical-grade producers of the synthetic drug could be the fountainhead for organized crime groups, said Chicoine, who has raised the issue with his counterparts in China.

TORONTO—CTV says its Los Angeles bureau chief has been charged nearly a year after his arrest while covering the protests in Ferguson, Missouri.

The network says Tom Walters is facing charges of interfering with a police officer.
Walters was arrested last August while trying to ask a question of a Missouri Highway Patrol officer, and later released without charge. The incident was captured on video.

CTV reports that Walters recently received a summons to appear in a St. Louis court this month, on allegations he failed to comply with police commands to disperse from West Florissant Avenue, where many of the protests were held.

“Tom has the full support of CTV News as we fight these charges,” she said in a statement.

Several journalists were arrested while covering the Ferguson protests. At least two other media outlets say their reporters have been charged.

VANCOUVER—A longtime Liberal party executive has resigned over what he calls an unfathomable move to block a two-time former candidate from running in British Columbia.

Mike Hillman has stepped down as membership chairman for B.C. after the party’s decision to block Wendy Yuan from running as a Liberal candidate in the new riding of Steveston-Richmond East.

Hillman says he can’t understand how the party could treat someone with such disregard, especially after Yuan’s hard work registering thousands of new members. Yuan has run for the Liberals in Vancouver in the past two federal elections, but came up short both times against the NDP.

Hillman has been involved with the Liberals for nearly five decades and has served in various leadership capacities, including two terms as the party’s national vice-president for English.

He says he is still a party member and will remain involved in Liberal election campaigns in other ridings.

GRAND BEACH, Man.—A Manitoba man has turned his cellphone case over to police after it caused panic on a crowded public beach.

The black case, shaped like a handgun, was tucked in the waistband of the man’s shorts while he was at Grand Beach north of Winnipeg on Aug. 10.

RCMP were called and responded with real rifles and Tasers. They found the man sitting on the beach with family members, including children, and quickly determined he was only armed with an iPhone.

Sgt. Bert Paquet says the 34-year-old man was questioned and voluntarily gave officers the case for disposal. He will not face charges.

“Some people do not realize the risks associated with openly carrying or displaying these replicas in a public space. Anyone who owns this type or similar devices should safely dispose of them immediately,” Paquet said.

VANCOUVER—Dozens of participants have dropped out of the controversial National Energy Board review of Kinder Morgan’s proposed Trans Mountain pipeline expansion, saying they can no longer support a “biased” and “unfair” process.

Thirty-five commenters and interveners, including the Wilderness Committee and the Canadian Parks and Wilderness Society, sent a letter to the board Aug. 12 announcing their immediate withdrawal.

“It’s a sad day. We do not like to fly in the face of regulatory processes,” said Wilderness Committee climate campaigner Eoin Madden in a phone interview. “But we can’t abide by the system any more. It’s too flawed.”

The news came as the energy board was to release its draft conditions for the pipeline expansion. Commenters have six days to respond to the conditions, which are legally required and do not mean the board has made a decision yet.

Spokeswoman Tara O’Donovan said the board was disappointed the participants had chosen to withdraw. She said the board is committed to a thorough and fair environmental assessment.

“Our processes are fair and guided by legislation. We are also bound by the rules of natural justice, and our decisions are subject to review by the federal Court of Appeal.”