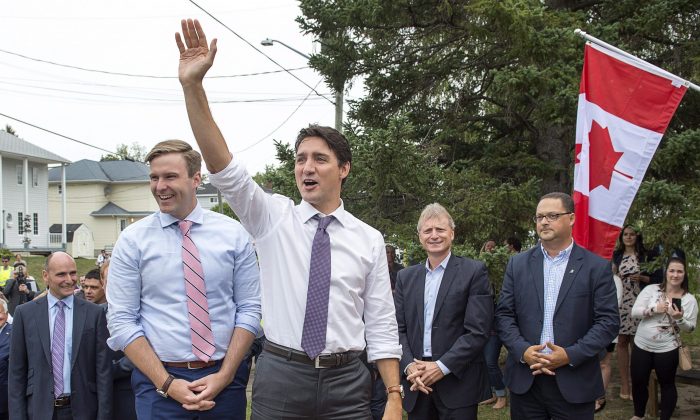 Prime Minister Justin Trudeau, accompanied by New Brunswick Premier Brian Gallant, waves to the crowd as he arrives for a visit to Wee College daycare and early learning centre in Moncton, N.B. on Aug. 30, 2017. (The Canadian Press/Andrew Vaughan)
Canada

Trudeau met directly with employees at the pay centre in Miramichi, N.B., the epicentre of complaints about the system.

He commended employees for taking innovative approaches to the challenge of resolving payroll issues for workers who have been either overpaid or underpaid, or weren’t paid at all for months.

“People are working with a tremendous level of creativity and excellence to get ahead of this problem,” Trudeau told a news conference.

Liberal MP Darshan Kang is vehemently denying allegations that he repeatedly sexually harassed a young female staffer in his Calgary constituency office and is vowing to defend his reputation “at all costs.”

On Aug. 29, Kang issued a statement proclaiming his innocence even as a damning new allegation surfaced that he tried to buy the woman’s silence. The NDP is demanding that Prime Minister Justin Trudeau immediately suspend the Calgary MP from the Liberal caucus until an investigation is completed.

Trudeau has refused to comment on the matter, saying only that it’s being handled through a recently created independent process for resolving such complaints.

Dietary guidelines should focus on reducing carbs, not fat: Study

A large Canadian study has found that contrary to popular belief, a diet that contains a moderate amount of fat is linked to a reduced risk of premature death compared to the much-touted low-fat diet.

The study by researchers at McMaster University in Hamilton also found that eating a high-carbohydrate diet is associated with an increased risk of dying early.

Findings from the PURE study of more than 135,000 people in 18 countries suggest that dietary guidelines should focus on reducing carbohydrate consumption, rather than fat intake.