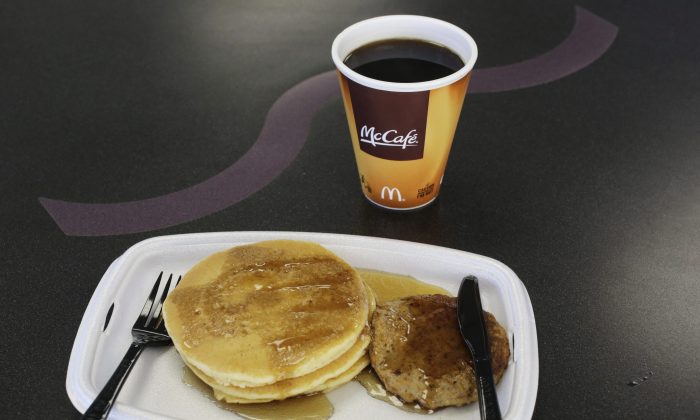 A McDonald's breakfast is arranged for an illustration at a McDonald's restaurant in New York, Feb. 14, 2013. The fast-food chain has no plans to launch all-day breakfast in Canada, despite that its American restaurants will introduce the option on Oct. 6. (The Canadian Press/AP/Mark Lennihan)
Canada

TORONTO—McDonald’s Canada has bad news for those looking to get their Egg McMuffin fix past 11 a.m.

Spokeswoman Lisa Hutniak said the company has no plans to launch all-day breakfast, despite the brand’s announcement that its American restaurants will introduce the option on Oct. 6. Hutniak said they are keeping a close eye on the nationwide experiment by the Americans and are always looking to meet the needs and wants of their customers.

McDonald’s ran a pilot program of all-day breakfast in select American markets earlier this year. New CEO Steve Easterbrook is looking to make his mark at the fast-food giant, where sales have faltered as consumers seek out fast food beyond the burger.

TORONTO—A man convicted of terrorism in a plot to derail a passenger train spat at lawyers and hurled a cup of water across a Toronto courtroom Sept. 2 after a psychiatrist testified that the man likely suffers from schizophrenia.

Chiheb Esseghaier vehemently expressed his disagreement with the diagnosis of Dr. Philip Klassen, thumping his chest and waving his hands in the air as he said the psychiatrist was being untruthful.

“You are lying,” Esseghaier said to Klassen. “Which delusion, which schizophrenia, and which mental illness?”

Klassen told the court Esseghaier suffers from a mental disorder, but—unlike the first expert who examined the man—said the Tunisian national was still fit to be sentenced for his crimes.

Esseghaier and his co-accused, Raed Jaser, were found guilty in March of a terror-related conspiracy to commit murder and six other terror-related charges between them. Their sentencing hearing is currently under way. Both face the prospect of life in prison.

Vancouver artists could carve some good out of recent powerful windstorm

VANCOUVER—A windstorm that toppled trees across British Columbia’s south coast could fuel many fireplaces over the coming winter, but officials hope it will spark something creative, too.

The Vancouver Park Board says chunks from several huge cedars will be donated to First Nations artists, but that still leaves plenty of wood that must be piled and removed.

The park board estimates at least 500 trees came down in parks and along boulevards during the Aug. 29 storm, with large canopied trees such as maples, among the losses.

Park board chairman John Coupar says several coveted species of hardwood are available. He says everyone is welcome to remove wood from boulevards and use it as they wish, although chainsaws shouldn’t be used on public property.

VANCOUVER—A mistake by Air Canada in offering a package of flights at just 10 percent of the value has triggered a proposed class-action lawsuit by customers who thought they got an amazing deal.

Court documents, filed in both Quebec and British Columbia, stated the flight package was offered between Aug. 25 and Aug. 28 at just under $800, but customers were told days later the cost of 10 one-way business-class flights in the western U.S. or Canada was actually $8,000.

The documents said Air Canada refused to live up to its contractual obligations and illegally removed the flight passes. Air Canada spokeswoman Angela Mah wouldn’t comment on the lawsuit but released a previous statement that said a “computer-loading error” was responsible for the “temporary mispricing.”

“Air Canada has contacted purchasers to apologize and provided a refund,” the statement said.

CALGARY—A Calgary woman says her stolen car was recently returned to her by police but they did a lousy job of searching it before giving it back to her.

Courtney Pickering says several days after her car was stolen, she was relieved to receive a call from police stating her car had been located and she could retrieve it once the forensic unit had conducted its search.

But when she went to the impound lot to pick it up, she noticed a piece of paper in her cup holder, pulled on it and a bag of cocaine flipped out. She also discovered a crack pipe on the rear seat, four pieces of identification in the glove box, a knife in the front passenger door, and a lead pipe on the floor. Later, she spotted the butt of a gun under the seat.

Pickering says she has filed a complaint with the professional standards section of the Calgary police service in the hopes it will help prevent similar situations from occurring in the future.

The Joulter Cays covers nearly 114,000 acres of uninhabited islands and sand flats northwest of Nassau, according to a statement from the National Audubon Society, which worked on the park’s proposal along with the Bahamas National Trust.

More than 50 percent of bird species in the Bahamas migrate from the U.S. and Canada. The national park hosts the largest congregation of piping plovers outside the U.S., according to Audubon.