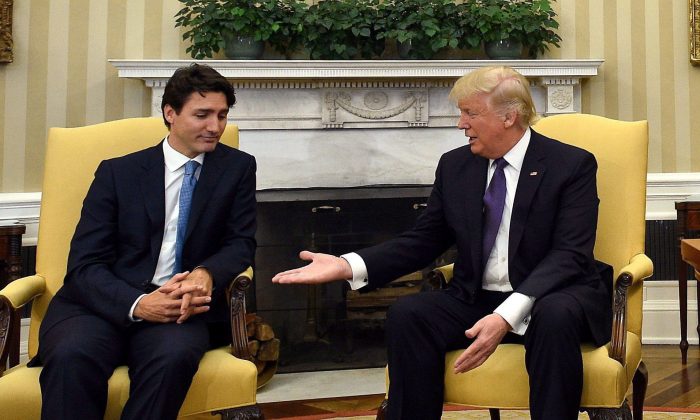 Prime Minister Justin Trudeau meets with US President Donald Trump in the Oval Office of the White House on Feb. 13, 2017. A NAFTA review panel has unanimously ordered the U.S. Department of Commerce to reconsider its costly duties against Canadian mills that produce glossy paper. (The Canadian Press/Sean Kilpatrick)
Canada

NAFTA panel: US must reconsider duties against Canadian paper mills

A NAFTA review panel has unanimously ordered the U.S. Department of Commerce to reconsider its costly duties against Canadian mills that produce glossy paper.

The countervailing duties were imposed in November 2015 after a U.S. investigation into Canadian imports of supercalendered paper, which is mainly used in magazines, catalogues, corporate brochures, and advertising inserts.

Under the new ruling, the United States must reconsider some aspects of the reasoning behind its initial findings and respond to the NAFTA decision by mid-summer.

OTTAWA—Prince Charles and his wife Camilla, the Duchess of Cornwall, will visit Canada this summer to participate in the celebrations marking the country’s 150th birthday.

Gov. Gen. David Johnston says they have accepted the government’s invitation to undertake a tour, their fourth visit as a couple.

The royal duo will be in Canada from June 29 to July 1, travelling in Ontario, Nunavut, and the Ottawa area, where massive celebrations are planned for Canada Day.

FERRYLAND, N.L.—A towering iceberg stationed off Newfoundland’s east coast is drawing dozens of people to the small shoreline community sitting in its shadow.

The massive iceberg has become a star attraction in Ferryland, where cars were backed up bumper to bumper Sunday as curious onlookers tried to get a glimpse of it.

It’s been a busy season for icebergs so far, with 616 already having moved into the North Atlantic shipping lanes compared to 687 by the late-September season’s end last year.

CRANBROOK, B.C.—Dozens of marriage certificates, some citing two wedding ceremonies occurring on the same day, were entered as evidence today at the trial of a fundamentalist church leader charged with polygamy in British Columbia.

Winston Blackmore is the head of a religious group in Bountiful, a community in southeast B.C. where residents are known for practising a faith that condones plural marriage.

Blackmore is accused of marrying 24 women and is standing trial with James Oler, who an indictment says has four wives. Each is charged with one count of polygamy.

OTTAWA—Defence Minister Harjit Sajjan says he hopes the Indian government will do more to find justice for the thousands of Sikhs who were killed in violent riots more than 30 years ago.

Sajjan is on a bit of a homecoming to the Asian country, where he was born and lived until coming to Canada with his family when he was five years old.

But while the main purpose of the trip is to establish closer ties between the two countries, Sajjan says the deaths that occurred across India in 1984 in the wake of Indira Gandhi’s assassination have figured prominently in his meetings.