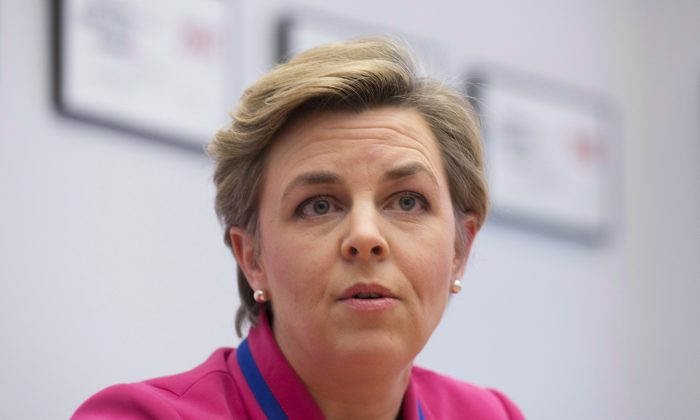 Conservative leadership candidate Kellie Leitch during an interview in Ottawa on April 11, 2017. Leitch says she would look to roll back the Liberal plan to legalize marijuana if she becomes the party's leader and eventually prime minister. (The Canadian Press/Adrian Wyld)
Canada

OTTAWA—Conservative leadership hopeful Kellie Leitch says she would look into rolling back the Liberal plan to legalize marijuana if she becomes the party’s leader and eventually prime minister.

Leitch says marijuana is a “dangerous drug” that should not be legalized due to public health and safety concerns.

A pediatric orthopedic surgeon, Leitch says scientific evidence shows the drug can have damaging effects on the brains of those under the age of 25, and should only be available from pharmacies for patients with prescriptions.

The Canadian Medical Association is recommending a minimum age of 21, and limits on quantities and potency for those aged 21-25 to discourage use and sharing among underage friends.

VANCOUVER—British Columbians have faced an onslaught of government announcements, party ads, and political finger-pointing over the last few months. It was all a prelude to the provincial election campaign, which officially began April 11.

New Democrat Leader John Horgan said his party will create jobs in every corner of the province by making public investments to attract more private-sector investment.

The Greens captured a single seat in the legislature last election, but Leader Andrew Weaver is predicting a breakthrough for his party this time around.

OTTAWA—Pakistani activist and Nobel Peace Prize winner Malala Yousafzai, who famously survived a Taliban bullet in 2012, has been bestowed with honorary Canadian citizenship.

Yousafzai was greeted on the steps of the Centre Block by Prime Minister Justin Trudeau on April 12, as well as a parade of dignitaries, cabinet ministers, and diplomats inside the rotunda beneath the Peace Tower.

“While I will always be a proud Pashtun and citizen of Pakistan, I am grateful to be an honorary member of your nation of heroes,” Malala said in a speech to a joint session of Parliament.

LONDON, Ont.—Police in southwestern Ontario say 78 people have been arrested in a human trafficking investigation.

London police say 18 women who were involved in the sex trade as a result of alleged human trafficking were assisted during the investigation. They say the alleged victims, ranging in age from 15 to 55, were relocated to a safe place away from their alleged traffickers and provided with supports.

Officers seized drugs, cash and weapons, including knives, an expandable baton, and a rifle.

OTTAWA—Polar bears and the Canadian monarch butterfly have been added to an international list of species and subspecies that are at risk of disappearing entirely from the planet.

The list is part of a new report released April 12 at an international biodiversity conference in Ottawa.

The NatureServe Canada report, “On Guard For Them,” finds 517 species and subspecies found in Canada to be in jeopardy—some on the verge of extinction, others just recently classified as vulnerable.

Of those, 213 are found only in Canada, leaving this country solely responsible for keeping them from being wiped off the face of the earth.