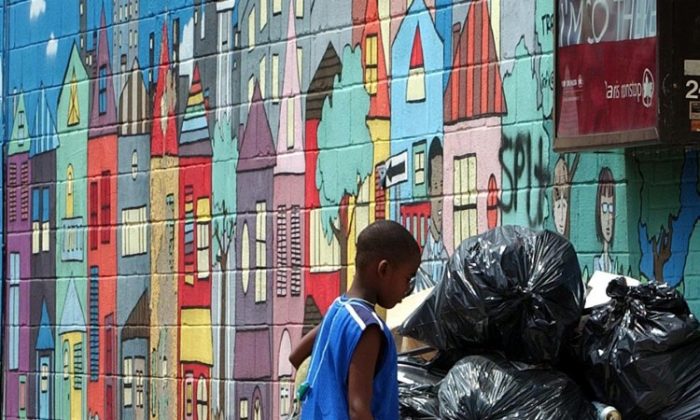 A youth walks past a pile of dumped garbage bags during a garbage collection strike in Toronto in July 2002. Canada produces the most garbage per capita when compared to other developed countries, according to a new report. (J.P. Moczulski/AFP/Getty Images)
US

Canada produces the most garbage per capita when compared to other developed countries, a report by the Conference Board of Canada (CBC) has found.

In 2008, Canada produced 777 kg per capita of municipal waste, twice as much as Japan which ranked as the best performer in waste generation, according to the CBC’s benchmarking report done every two years.

“The measure that we used is the gross amount of solid waste that is generated,” explains Len Coad, CBC’s director of energy, environment, and technology policy.

“If you subtract from that the 30 percent that is diverted through recycling in Canada, you are still at a net volume of solid waste that is higher than Japan generates in total.”

Coad says that while the causes were not investigated in detail, contributing factors to Canada’s waste generation include the high levels of income and our consumer-oriented society.

“We don’t have the strong waste management initiatives and policies that other nations have,” he says.

Canada, which received a C grade in the report, got an overall ranking of 15 out of the 17 countries considered, ahead of the U.S. and Australia which each received a D. This is the same ranking Canada achieved in 2009.

France, Norway, and Sweden had the best environmental performance of all the countries.

Some of the other areas in which Canada performed below average include forest cover change, emissions of nitrogen and sulphur compounds, greenhouse gases, and volatile organic compounds, as well as water withdrawals, energy intensity, and marine trophic index.

Overconsumption is one of the leading causes of Canada’s poor performance in some of the areas, the report says. The rate of water withdrawals in Canada is almost double the average of the other countries, and is only lower than the U.S.

Canada does, however, perform well when compared to the other countries when it comes to the use of forest resources, low-emitting electricity production, water quality index, threatened species, and particulate matter concentration.

“Canada must do more to lower greenhouse gas emissions, to use its freshwater resources more wisely, and to reduce waste,” says the report.

Coad says the goal of the benchmarking exercise is to highlight Canada’s performance in various areas including the environment.

“We are hoping that it will continue to focus the attention of Canadian citizens, businesses, and policy makers on improving our environmental performance, placing less pressure on the environment, and adopting best practices from other countries,” he says.