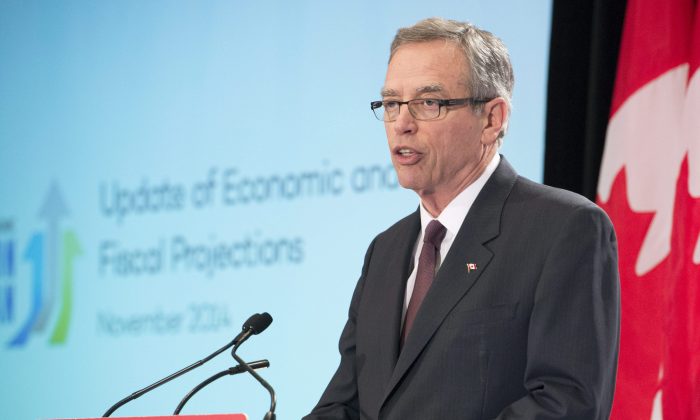 Finance Minister Joe Oliver delivers the Update of Economic and Fiscal Projections at a luncheon in Toronto on Nov. 12, 2014. (The Canadian Press/Frank Gunn)
Business & Markets

Canada Heading for Surplus in 2015

Canada is on track to balance the books in 2015 according to the federal government’s Update of Economic and Fiscal Projections. Finance Minister Joe Oliver delivered the message at a luncheon hosted by the Canadian Club of Toronto on Wednesday, Nov.12.

The broad message is a very positive one after Canada ran double-digit budget deficits from 2009 to 2013 during the recovery from the financial crisis that hit in late 2008.

Canada has seen one of the strongest economic performances among the G-7 in terms of real GDP and employment growth during this recovery period.

Over 1.2 million more Canadians are working now than in July 2009. This is an increase of 7.3 percent, one of the strongest in the G-7 (U.S. is 7.7 percent). Furthermore, these jobs are “overwhelmingly full-time, in high-paying sectors and in the private sector,” according to the Department of Finance.

While the bottom line numbers look good, the real concern revolves around the falling price of oil and reduced global growth forecasts, which are new risks that have developed since Budget 2014 in February.

The government’s projections estimate that the impact of lower crude oil prices will reduce nominal GDP by $3 billion in 2014 and $16 billion per year over the following four years. This is if crude oil prices remain near their current levels.

According to the International Monetary Fund, the outlook for global growth for 2014 has been revised lower since Budget 2014 to 3.3 percent from 3.7 percent, and for advanced economies from 2.2 percent to 1.8 percent.

The work leading up to the November update was undertaken at a period of high uncertainty in financial markets, and with the drop in energy prices, the government felt it was appropriate to set aside $3 billion for contingencies. However, if the amount set aside for contingencies is not used it will go toward reducing federal debt. In the past two years, this contingency was reduced to $1.5 billion.

Another positive is that Canada’s total government net debt continues to decline, and remains the lowest of any G-7 country. The federal debt-to-GDP ratio is expected to fall to pre-recession levels by 2017. For 2013-2014, it was 32.3 percent and by 2017-18, it is projected to fall to 27.3 percent.

According to detailed fiscal projections, the federal debt is expected to be eliminated altogether sometime between 2036 and 2040.

The government is seeing the light at the end of the long tunnel after the financial crisis. That light is balanced budgets and delivering on further tax relief for Canadian families and businesses.

While the debate will continue over the effectiveness of measures such as income splitting, the overall federal tax burden is at its lowest level in over 50 years.

“Our government is taking steps to put more money back into the pockets of Canadian families. We will continue to take the action necessary to secure prosperity for this generation and the next,” Oliver said.