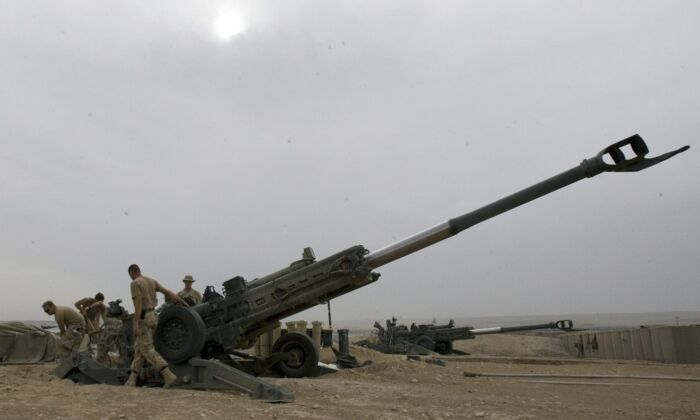 Soldiers with the Royal Canadian Horse Artillery B Troop move their M777 155mm Howitzer at the forward operating base in Helmand Province, Afghanistan April 15, 2007. (The Canadian Press/Ryan Remiorz)
Canada

Canada Has Sent Heavy Artillery and Ammunition to Ukraine

Canada has sent a number of M777 howitzers and ammunition from the Canadian Armed Forces to the Security Forces of Ukraine, fulfilling the prime minister’s promise to send heavy artillery to the embattled country.

The M777 towed howitzer is capable of hitting targets at a range of up to 30 kilometres, the Department of National Defence said.

It’s the Canadian Army’s main artillery gun, firing 155-millimetre shells. Thirty-seven of the weapons were acquired from the United States.

The equipment provided is part of the Armed Forces inventory and will be replenished, the government said.

A spokesman for Defence Minister Anita Anand refused to confirm any further details Friday, saying the Ukrainians have asked allies to be careful about what information is being shared.

The government is not saying how many howitzers or how much ammunition has been provided to Ukraine, or how much it will cost to replace.

“Ukraine is defending the freedom of Europe from Russia’s genocidal war,” said Alexandra Chyczij in a statement.

“We are grateful that Canada and allies continue to provide the weapons and matériel the courageous Ukrainian Armed Forces need to defeat Russia.”

The Liberal government has previously dipped into the Canadian Armed Forces inventory to provide lethal aid to the Ukrainian military.

However, unlike some of the weapons already donated to Ukraine, the M777s remain in use. In response to Russia’s attack, the government recently deployed one M777 unit to reinforce a Canadian-led NATO battlegroup in Latvia.

Retired lieutenant-general Andrew Leslie, who served as an artillery officer, said in an interview this week that the guns would be vulnerable to Russian assaults.

“The M777 gun crews are out in the open and they’re towed by light-skinned vehicles,” he said. “So they’re very vulnerable to fighter jets to attack helicopters and to relatively sophisticated forces such as the Russians have.”

The federal government said Friday it’s finalizing contracts to buy commercial pattern armoured vehicles that will be sent to Ukraine as soon as possible.

It’s also negotiating a service contract for maintenance and repair of the specialized drone cameras that have already been sent.

The government set aside another $500 million in the recently released budget to provide military aid to Ukraine, after committing $118 million worth of equipment since January.

Earlier on Friday, Finance Minister Chrystia Freeland said Russia should be booted from the G20 over its unprovoked invasion of Ukraine.

It was a key topic of discussion during meetings this week of finance ministers and central bankers from the group of nations in Washington, D.C.

Freeland said Russia doesn’t have a place at the table among countries trying to maintain prosperity when its illegal war in Ukraine has strained the global economy.

But in her comments during a closing news conference alongside her Ukrainian counterpart and International Development Minister Harjit Sajjan, Freeland hinted that the feeling isn’t unanimous.

China has argued against removing Russia from the group.

“You can’t be a poacher and gamekeeper at the same time,” Freeland said about why Russia should be expelled.

“You don’t invade and try to take over another country. Having violated that principle, and continuing to violate it with an ongoing war, it’s impossible to talk about international collaboration, international co-operative efforts with Russia.”

Freeland, along with other allies, walked out of the G20 meeting when the Russian delegation looked to speak. She said Canada won’t be a part of any meeting where Russia is taking part.

By Sarah Ritchie and Jordan Press