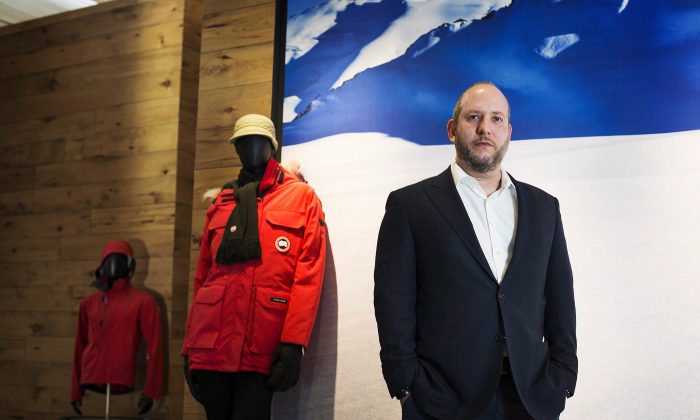 Dani Reiss, president and CEO of Canada Goose Inc., stands for a portrait at his office showroom in Toronto on Nov. 28, 2013. Canada Goose, one of the world’s leading makers of extreme weather outerwear, is selling a majority stake in the company to private investment firm Bain Capital. (The Canadian Press/Aaron Vincent Elkaim)
Canada

TORONTO—Canada Goose, one of the world’s leading makers of extreme weather jackets, is selling a majority stake in the company to U.S.-based private investment firm Bain Capital.

While the terms of the deal were not disclosed, it marks the latest effort by Canada Goose to expand its reach into new markets around the globe and beef up its local manufacturing operations.

Under the agreement, Dani Reiss will remain president and chief executive and continue to hold “a significant minority stake” in the company, which prides itself on making all of its winter jackets in Canada.

Canada Goose has hit the accelerator on expansion over the past few years as it responds to a stronger demand for its jackets.

“I believe that we’re going to grow substantially,” Reiss said in a recent interview with The Canadian Press about the company’s future.

Founded in a small warehouse in Toronto more than 55 years ago by Reiss’s grandfather, Canada Goose now employs more than 1,000 people and its apparel is sold in more than 50 countries.

As part of its image, the company has chosen to keep manufacturing operations in Canada for its apparel, which includes jackets, gloves, and winter hats. Canada Goose has also expanded into children’s winter wear.

This month, Canada Goose began the final stages of moving to a new factory in Toronto that nearly doubles the size of its workspace to 94,000 square feet.

But staying in Canada comes at a price for both the company and its customers because of higher labour costs compared with those in Third World countries typically associated with clothing manufacturing.

The jackets generally cost several times more than those of other competitors, which has helped build the company’s name as a high-end brand. Canada Goose jackets have been seen in Hollywood movies and on celebrities at the Sundance Film Festival.

Boston-based Bain Capital LLC is a global private investment firm with approximately $70 billion in assets under management, which have included companies like Burger King, Clear Channel Communications, and Domino’s Pizza.

Since its creation in 1984, Bain Capital has invested in Canadian companies like Shoppers Drug Mart (TSX:SC), Bombardier Recreational Products, and Dollarama (TSX:DOL), which has become a hugely lucrative venture as the popularity of dollar stores has soared in Canada.