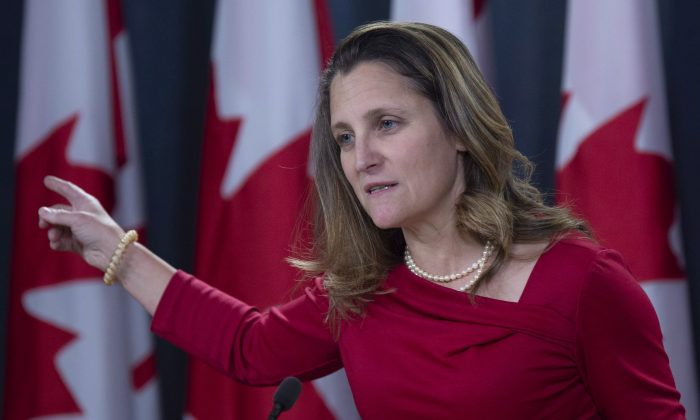 TORONTO—Canada has formally demanded that China release Canadians Michael Kovrig and Michael Spavor, who have been in custody for more than a week. Canada’s allies, including the United States, UK, and European Union, added their voices in support of Canada’s position.

“We are deeply concerned by the arbitrary detention by Chinese authorities of two Canadians earlier this month and call for their immediate release,” Canadian Foreign Affairs Minister Chrystia Freeland said in a written statement.

The detention of the two Canadians, along with a third earlier this week, have taken place since Canada arrested Huawei CFO Meng Wanzhou in Vancouver on Dec. 1, on an extradition request from the United States. China says there’s no connection between the detentions and Meng’s arrest.

“Canada is a country governed by the rule of law,” Freeland said. “Canada is conducting a fair, unbiased and transparent legal proceeding with respect to Meng Wanzhou, Huawei’s chief financial officer. … The rule of law is fundamental to all free societies; we will defend and uphold this principle.”

In an interview on Dec. 19, Prime Minister Justin Trudeau told Global News that he hadn’t yet talked to his Chinese counterpart about the detention of the three Canadians, saying he didn’t want to “politicize” or “amplify” the issue because it wouldn’t contribute “to the outcome we all want, which is for Canadians to be safe and secure.”

During a press conference with Freeland in Washington on Dec. 14, U.S. Secretary of State Mike Pompeo directly asked China to release the Canadians, calling their detention unlawful and unacceptable. Shortly after Freeland’s statement on Dec. 21, the U.S. State Department reiterated its call for the release of the detained Canadians.

“We share Canada’s commitment to the rule of law as fundamental to all free societies, and we will defend and uphold this principle. We also express our deep concern for the Chinese government’s detention of two Canadians earlier this month and call for their immediate release,” Robert Palladino, a spokesperson for the State Department, said in a statement.

Canadian authorities have said the nature of McIver’s case is different than the other two.

Kovrig, a former diplomat on a leave of absence from Canada’s foreign-affairs department, is currently employed as an adviser with an international think tank. He is reportedly being denied legal representation and isn’t allowed to turn off the lights at night. Spavor is a businessman known for running cultural exchanges with North Korea.

The U.K. and EU also issued statements in support of Canada.

“I am deeply concerned by suggestions of a political motivation for the detention of two Canadian citizens by the Chinese government. I call for them to be treated in a fair, unbiased and transparent manner,” British Foreign Secretary Jeremy Hunt said.

“The declared motive for the arrest and detention of Michael Kovrig and Michael Spavor, both Canadian nationals, raises concerns about legitimate research and business practices in China,” an EU spokesperson said.

In her statement, Freeland said she appreciates the help of those speaking out in support of Canada.

“We share with our partners the conviction that the rule of law is not a choice: it is the bedrock of democracy. Canada will not compromise nor politicize the rule of law and due process.”