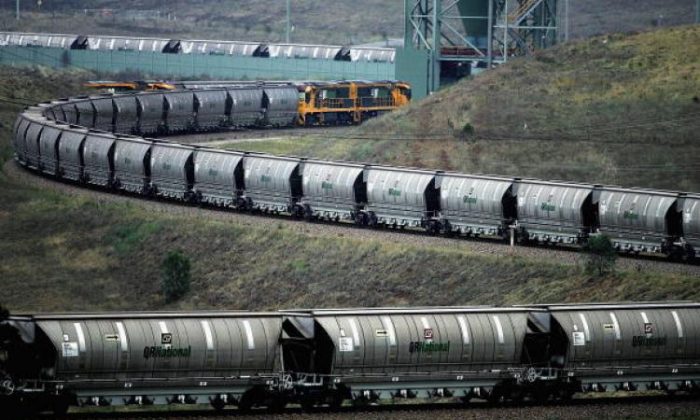 Australia is responsible for a third of the world's traded coal. (Ian Waldie/Getty Images)
Australia

Canadian mineral companies are moving to fill the gap left by Australian coal exports into China with companies like Teck Resources announcing they have been diverting coal resources to China.

Teck Resources in a market update on Nov. 22, noted it had increased its steelmaking coal sales to China for the fourth quarter of 2020 in response to increased demand.

China Investment Corporation has a major stake in Canada’s Teck Resources, and the company appointed a Chinese regime official to its board of directors.

“These sales have been at higher pricing levels compared to markets outside China. Estimated total fourth-quarter sales remain within Teck’s existing guidance of 5.8-6.2Mt, with approximately 20% of these sales now to Chinese customers,” the company reported.

Another company watching the trade dispute is Atrum Coal.

Atrum’s Chief Executive Andy Caruso told News Corp’s The Australian on Monday that he did not believe China was looking to open up Canadian coal mines or turn away from Queensland miners. But he said that Chinese steelmakers had become increasingly aware of the need for other suppliers.

“Markets including China will be looking to secure strong, high-quality resources,” he said. “It is a trigger for Chinese and other buyers to rethink their longer-term supply sources.”

The stalemate between Australia and China over coal imports has left nearly 78 ships with Australian coal in limbo as Chinese authorities refuse to let the boats unload their cargo.

Minister of Resources Keith Pitt said that while the stoppage on Australian coal was concerning, he noted that China was not Australia’s primary market for coal.

“Japan is our biggest market for thermal coal; it’s about twice the size currently of what goes into China,” Pitt said to the ABC’s Radio National in November.

Pitt also noted that this is not the first time Australian coal shipments had experienced delays.

“This time of year in China, you know, they look at a thing called the quota. There have been times previously where this has created some challenges around this time of year, that normally they resolve themselves early in the new year, sort of mid to late January,” Pitt said.

Canada’s foreign ministry has thrown its support behind Australia over the recent incendiary social media post by a top Chinese regime official with a spokesperson saying they were shocked by the doctored image.

“The dissemination of such inflammatory material and disinformation is beneath the standards of proper diplomatic conduct,” Christelle Chartrand, spokesperson for Canada’s Ministry For Global Affairs, told The Epoch Times.

Chartrand noted that Australia and Canada were collaborating very closely on important issues related to China as five eyes allies and as liberal democracies.

“Canada continues to engage with China with eyes wide open while defending our interests and standing up for our values,” Chartrand said.

Australia and China have experienced a significant ramp up in tensions after a spokesperson for China’s foreign ministry posted a fake image of an Australian soldier holding a knife to the throat of an Afghan child.

Associate Five Eyes allies New Zealand, the United States, and the UK have all voiced support for Australia. New Zealand raised the issue with China and the UK and America declared that they stood “shoulder to shoulder” with Australia over the tweet.