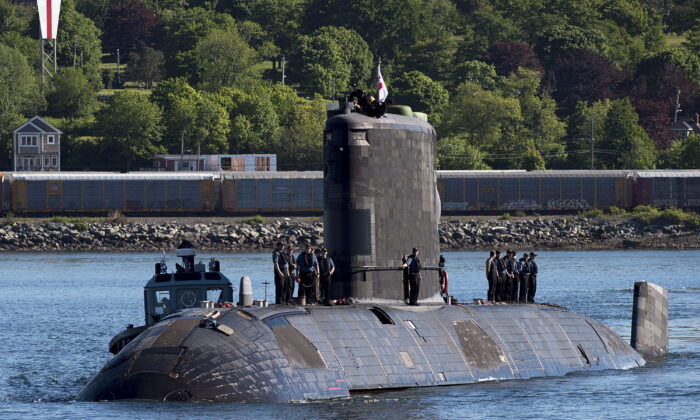 HMCS Windsor, one of Canada's Victoria-class long range patrol submarines, returns to port in Halifax on June 20, 2018, after completing a five-month deployment in the Euro-Atlantic region. (The Canadian Press/Andrew Vaughan)
Canada

Canada is in critical need of a new submarine fleet and it can’t go about acquiring one the way it did in the past, according to a new report.

The Macdonald-Laurier Institute research report “Deadline 2036: Assessing the requirements and options for Canada’s future submarine force” analyzes Canada’s history of and use for submarines and examines the purchasing considerations for a future fleet.

“Decision-makers in Ottawa will have to make a difficult call in the next two years about the kind of submarine capability the RCN [Royal Canadian Navy] and the CAF [Canadian Armed Forces] need for the next half-century,” writes report author Jeffrey F. Collins, a political science professor at the University of Prince Edward Island.

Canada’s fleet currently has four diesel-electric Victoria-class submarines that were bought from the United Kingdom second hand in 1998 and they’ll be 50 years old by the time they are decommissioned between 2036 and 2042, the report noted.

The good news, Collins says, is that the Department of National Defence (DND) indicated that a “Canadian submarine patrol project” has been sanctioned. In mid-July, a DND spokesman told The Canadian Press that the CAF was establishing the project “to inform timely governmental decision-making about a potential replacement class of submarines, and avoid any gap in submarine capability.” Costs, requirements, and timelines have not yet been established for the project.

Collins says the timing of the DND announcement could not come any sooner since major defence procurement projects typically take 15 years or more.

Released in late September, the report outlines three options for purchasing submarines. They can be built domestically under the National Shipbuilding Strategy, they can be an off-the-shelf product that gets “Canadianized,” or they can be collaboratively built with another country.

Submarines are critical for defending the rules-based international order at sea and Canada has a vast maritime domain—including in the Arctic—where there’s a need to exert influence, Collins says.

He singles out the threats from Russia and China, with there being no doubt about the former’s military interest in the Arctic region. The two countries are building up their nuclear and non-nuclear submarine fleets, according to the report.

Collins also says Canada needs to step up its operations in the South China Sea, given the relative decline of the United States on the international stage.

The report described the functions submarines are frequently tasked with such as intelligence, surveillance and reconnaissance missions, deterring opponents, building alliances, and supporting ground forces ashore, among others.

“The time has come for Canada to understand and embrace the important and undeniable linkage of seapower to its national interests,” states RCN retired vice-admiral Mark Norman in the report’s foreword.

The history of past Canadian submarine acquisitions is “one of luck and timing” in that surplus submarines were available at relatively cheap prices at a time when there was just enough political will to make the purchase, Collins says. “This is not a recipe that can be replicated today,” he adds.

Canada can no longer buy submarines from the United Kingdom since that country declared in 1994 that its fleet would go all nuclear-powered.

Collins notes that Canada is not in the market for nuclear-powered submarines, even though they would be more suitable for work in the Arctic since they would not have to resurface and recharge the way diesel-electric submarines do.

On Sept. 15, the United Kingdom, United States, and Australia launched the AUKUS defence partnership with the immediate objective of procuring a nuclear-powered submarine fleet for Australia.

Canada is not included in the partnership, allegedly due to its missteps on several fronts in dealing with communist China. Prime Minister Justin Trudeau said Canada was excluded because it didn’t need nuclear submarines.