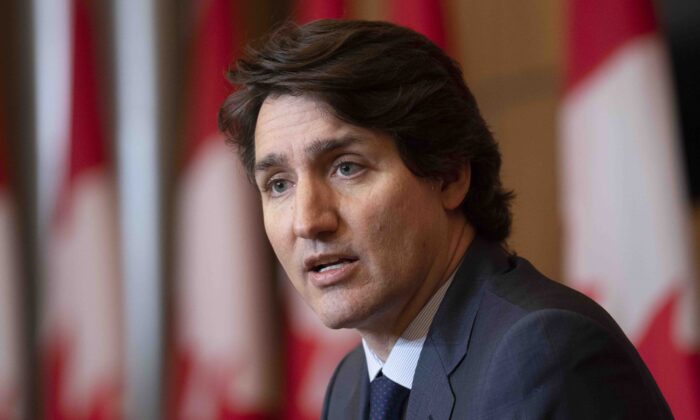 OTTAWA—Canada is extending and expanding its mission to train Ukrainian soldiers but it is not, so far, prepared to help arm them with lethal defensive weapons as Ukraine has requested.

Prime Minister Justin Trudeau is not, however, categorically ruling out sending weapons in future.

Asked repeatedly Wednesday why Canada is not sending weapons, he did not specifically answer but left the door open.

“We continue to look for ways to be helpful to the Ukrainian people as they stand up for their rights to live in a democracy, to choose the course of their country, to defend their territorial integrity. This is something we are unequivocal on,” Trudeau told a news conference at the end of a three−day cabinet retreat.

“We will continue to monitor the situation closely and stand by our Ukrainian friends as we look to give them the support that they need.”

He said he’s also authorized the Canadian Armed Forces to deploy 60 additional personnel to join the 200 troops already on the ground, with further capacity to increase that number to 400.

The price tag includes the provision of non−lethal equipment — such as scopes and body armour — intelligence−sharing and support to fight cyberattacks, Trudeau said.

He stressed that “this is not a combat mission” but is intended to help Ukraine defend itself against Russian aggression.

“This is the way that Canada can best help and it’s an extension of our firm belief that standing up for Ukraine means being there so they can speak and defend themselves, while at the same time continuing to pursue a diplomatic solution at all levels,” he said.

Russia has positioned about 100,000 troops across Ukraine’s border along with tanks and other heavy artillery, raising fears across Europe and the NATO military alliance of an invasion, something Russia has denied.

Trudeau also committed Wednesday $50 million in development and humanitarian aid to Ukraine, on top of a $120−million loan offered last week to help stabilize its economy.

And he said Defence Minister Anita Anand will travel to Latvia and Ukraine to visit with Canada’s troops there in the coming days.

While the NDP welcomed the extension of the training mission, Conservatives accused Trudeau of letting Ukraine down.

“Ukraine has been clear in its request to the Trudeau government of what it needs to defend itself: Lethal defensive weapons,” a trio of Conservative MPs said in a statement.

“The governments of the U.S., U.K., Poland, Lithuania, Latvia, Estonia, Czech Republic, and others have already provided lethal defensive weapons to Ukraine … The time for half−measures has long passed. Ukraine needs Canada’s support and today Mr. Trudeau let them down.”

Asked how he expects to deter Russian aggression without arming Ukraine’s military, Trudeau argued the united front among NATO allies and western democracies against Russia’s conduct “is a significant deterrence in itself.”

“We have been clear on the steep economic sanctions and measures that will be brought in if Russia invades Ukraine to any further degree.”

Trudeau said he discussed the possibility of a new round of co−ordinated sanctions in a Wednesday telephone call with European Commission President Ursula von der Leyen.

“We’re agreed that strong, cohesive and aligned sanctions on individuals, on financial institutions, on other areas and sectors of the economy are going to be extremely important,” he said. “And Russia needs to be under no illusions that the concerted approach by western democracies will be clear and forceful in terms of economic impact on Russia.”

Melita Gabrič, the European Union ambassador to Canada, said the EU has a history of imposing co−ordinated sanctions with Canada against Russia in the years following the Kremlin’s 2014 annexation of the Crimean Peninsula and that has not changed in the current crisis.

“The EU as a global economic bloc has an array of options available to deploy, and while it’s too early to go into any detail, I would just like to really reiterate and emphasize that we’ve been working on sanctions in the past with Canada since the annexation,” Gabrič said in an interview.

“We have been co−ordinating our actions and co−ordinating what we are preparing in terms of deterrence. And we really see eye to eye. We appreciate Canada’s role in support of European security.”

Deputy Prime Minister Chrystia Freeland, who is of Ukrainian descent, stressed that Canada’s actions in support of Ukraine are not simply a show of political support for the large Ukrainian diaspora in this country.

“The stakes in this conflict are stark and directly relevant to Canada, and the Canadian national interests,” she said at the news conference with Trudeau.

“This is a struggle between democracy and authoritarianism. This is a direct challenge to the rules−based international order and an attempt to replace it with a world in which might makes right, and where the great powers, the nuclear−armed powers, have the authority to redraw the borders, dictate the foreign policies and even re−write the constitutions of sovereign democracies whose only fault is that they are smaller and their militaries are not as powerful.”

She warned that the “world’s dictators” are watching to see if democracies “have the will and the capacity to stand up for the rules−based international order.”

Trudeau echoed that, saying Russia’s threat to invade Ukraine is “a threat to all of us who cherish democracy.”