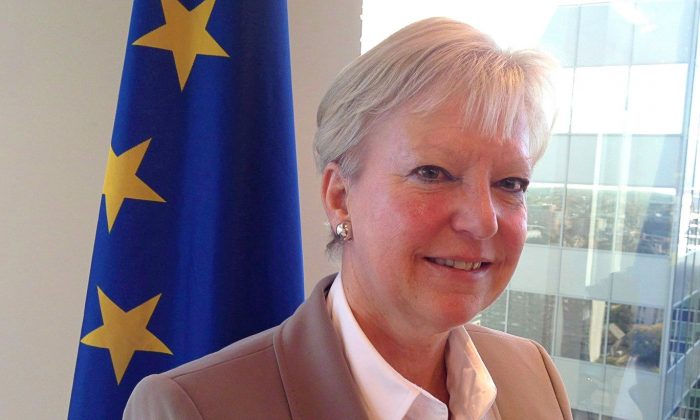 The EU's ambassador to Canada, Marie-Anne Coninsx, in her Ottawa office on Oct.8, 2013. (The Canadian Press/Mike Blanchfield)
Canada

OTTAWA—The European Union is giving its 28 member countries a say on the final ratification of its mammoth free trade deal with Canada in order to quell rising anti-trade sentiments, says the continent’s top envoy to Ottawa.

Marie-Anne Coninsx, the European Union’s ambassador to Canada, says the European Commission’s decision on Tuesday, July 6, to proceed with a “mixed” agreement won’t derail the timeline that will see the vast majority of the deal come into force early next year.

She also said that all 28 EU countries approve the Comprehensive Economic and Trade Agreement.

The mixed designation means each of the EU countries must ratify the deal, but the European Parliament’s approval—which Coninsx and others say will take place late this year or early next—will lead to “provisional application” of the pact.

Coninsx said there was a political need to deal with the rising tide of anti-globalization forces in Europe, by giving the bloc’s countries the right to ratify as part of the mixed designation.

“The main concern, or the objective of the European Commission, is to make progress with CETA in a maybe difficult environment,” she said in an interview.

“Given, I would say, the atmosphere in the European Union, not so much linked to the U.K. referendum but more a kind of a trend of anti-globalization, the European Commission has proposed a mixed agreement.”

After the Brexit vote, policy makers on both sides of the Atlantic would be better counselled to listen to voters.
— Maude Barlow, Council of Canadians

U.S. President Barack Obama said during his visit to Ottawa last week that while trade deals are crucial, the grievances about inequality being raised by working people had implications for the “social cohesion and political consensus” needed to liberalize trade across the globe.

EU Trade Commissioner Cecilia Malmstrom suggested as much Tuesday, saying that while the EU had the legal authority to claim exclusive jurisdiction over the deal, depriving European parliaments of a vote would do more harm than good.

“However, the political situation in the [European] Council is clear, and we understand the need for proposing it as a ‘mixed’ agreement, in order to allow for a speedy signature,” she said.

The Council of Canadians, a vocal opponent of trade deals, said Tuesday there is growing resistance in many EU member countries, and that ratifying CETA won’t be the “cakewalk” that many are predicting.

“After the Brexit vote, policy makers on both sides of the Atlantic would be better counselled to listen to voters, rather than pushing discredited solutions down people’s throats,” Maude Barlow, the council’s president, said in a statement.

The mixed agreement designation means 90 percent of the deal will take effect early next year, and Britain for the time being will remain bound by the treaty while it enters into its long negotiation to leave the EU, said Coninsx.

Canada’s trade minister said Canadian business will reap the benefits of the trade agreement well before Europe’s individual parliaments vote on it.

“It is very likely, almost certain, that provisional application would cover the lion’s share of the agreement,” Chrystia Freeland said.

Freeland said she welcomed EU Commission President Jean-Claude Junker’s warning to European parliaments that the “credibility of Europe’s trade policy is at stake,” so it must vote to deliver the deal.

“I think that is a message to European governments,” she said. “It’s important for Europe to show it can get things done, and CETA is a great opportunity to do that.”

Freeland said she had a lengthy conversation on Monday with Malmstrom, her EU counterpart, and still believes CETA has enough support to win approval in the European Parliament.

“Europe is complicated, we get that. It’s half a billion people. We’re confident we will get this done.”

Freeland said she would be lobbying for CETA when she meets some of her key European counterparts at a meeting of G20 trade ministers in Shanghai later this week.