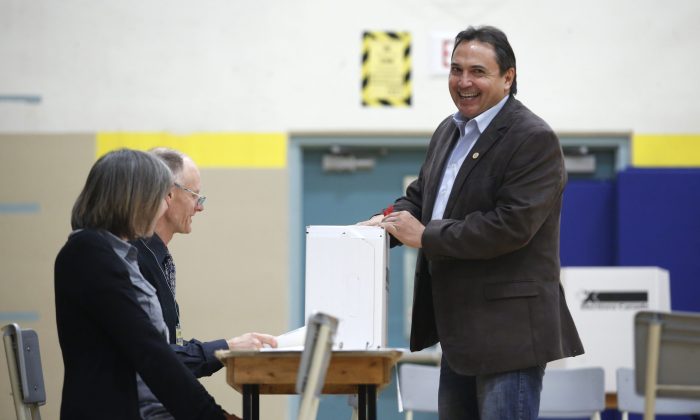 Assembly of First Nations National Chief Perry Bellegarde casts his vote in the 2015 federal election at the Hopewell Avenue Public School polling station in Ottawa, Ontario, on Oct. 19, 2015. Justin Trudeau was not the only winner in Canada's federal election this week: The country's aboriginal community saw a record 10 indigenous members elected to Parliament - up from seven in 2011 - in a victory for a community that felt neglected during a decade of Conservative rule. Bellegarde said that extra ballots had to be brought in to accommodate the number of aboriginal voters. (Patrick Doyle/The Canadian Press via AP)
Canada

TORONTO—Justin Trudeau was not the only winner in Canada’s election this week: The country’s aboriginal community saw a record 10 indigenous members elected to Parliament—up from seven in 2011—in a victory for a community that said it was neglected throughout nearly a decade of Conservative rule.

The election also saw a record-breaking 54 First Nations candidates run for office. Still, indigenous people will end up occupying just 3 percent of the 338 seats in Canada’s House of Commons. Indigenous peoples comprise 4.3 percent of the population, according to Statistics Canada, a government agency that collects census data.

New Prime Minister Justin Trudeau’s Liberals won a majority of the seats in Parliament and ended Conservative leader Stephen Harper’s more than nine years in power in Monday’s elections. Of the 18 aboriginal candidates who ran for the Liberals, eight won seats.

Trudeau campaigned on a promise of a new era of respect for indigenous people and committed to increased consultation, improved language rights, a national inquiry into missing and murdered women and more money for education. He also promised to attend future meetings of the Assembly of First Nations.

Chiefs have often complained about a lack of money for tribal education, the poor conditions of reserves, a frustrating process for settling land claims, the government’s refusal to call an inquiry into the high number of murdered and missing aboriginal women and Harper’s reluctance to meet face-to-face. There is also a growing empowerment of young indigenous people who are angered by the disparities between their standard of living and that of the rest of Canada.

“First Nations issues will now come to the forefront in the House of Commons,” he said. “Whether it’s murdered and missing indigenous women or education on reserves, a resolution for Metis land claim issues, we’re going to get a higher profile and hopefully a resolution of those issues. My role is going to be to speak loudly for the people of my community.”

Assembly of First Nations Chief Perry Bellegarde said that extra ballots had to be brought in to accommodate the numbers.

“Running out of ballots hasn’t happened before,” said Bellegarde. “I can tell you from talking to chiefs across Canada, there was an excitement, an awareness about this election. Aboriginal people were lined up in band offices and community centers to vote. People were engaged like never before.”

Bellegarde said his office is still working to confirm aboriginal voter turnout numbers but estimates it jumped from 40 percent to more than 50 percent this year.

Aboriginal voter numbers increased for several reasons. Bellegarde said some aboriginal chiefs bused residents to the polling stations and some closed their band offices ahead of the election to rally communities to vote. Community members also launched a “Rock the Vote,” campaign on social media to mobilize young people to vote in Canada’s east and mid-west provinces.

But the most significant motivator to rally voters was the desire for change and to oust Harper.

“I voted to get Harper out,” said Vancouver resident Lorelei Williams, 35. “We needed a government who cared about our indigenous people and both the NDP and Liberals cared about us.”

Harper issued an historic apology in Parliament in 2008 for one of the darkest periods in Canadian history—from the 19th century until the 1970s—when more than 150,000 aboriginal children were forced to attend Christian schools to rid them of their native cultures and languages and they were often abused in these schools.

But many in the community felt that Harper’s government refused to listen to their concerns in the past number of years.

“Canada had a reputation for respecting diversity and human rights, for caring for all of its people, that diminished under Harper,” said Bellegarde. “We have to get back to what we once were. I think we’ve helped ensure that will happen with this election’s results.”