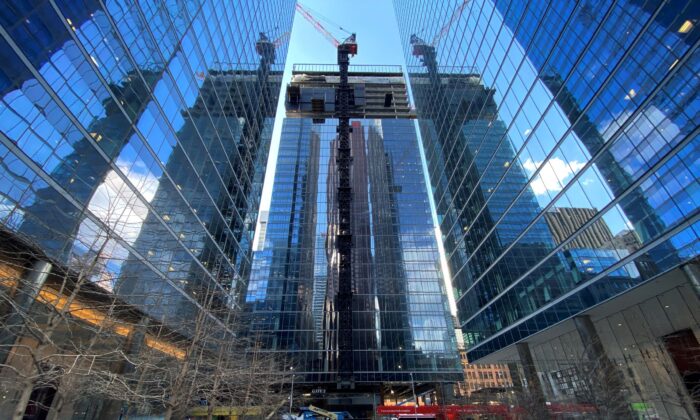 A construction crane is seen above Brookfield's Bay Adelaide North, the third office tower to be constructed at their Bay Adelaide Centre complex property in Toronto, Ontario, Canada on April 14, 2021. (Chris Helgren/Reuters)
Economy

OTTAWA—The Canadian economy most likely underperformed expectations in the third quarter amid ongoing supply chain woes and a brutal drought, official data suggested on Friday, prompting analysts to forecast the Bank of Canada could move slower on rate hikes.

The agriculture sector, hit hard by hot and dry conditions, is also weighing on economic activity.

Third quarter annualized GDP rose by just 1.9 percent, Statscan said in a flash estimate, much less than the 5.5 percent forecast by the Bank of Canada on Wednesday, when it signaled a rate hike could come as soon as April 2022.

Even though the central bank and Statistics Canada use slightly different ways of measuring GDP, analysts said the third quarter projections made an early hike less likely.

“This reduces the chance of the Bank hiking interest rates as soon as the second quarter next year,” said Stephen Brown, senior Canada economist at Capital Economics. Economic activity, which remains about 1 percent below pre-pandemic levels, is unlikely to close that gap until early 2022, he added.

“The supply bottlenecks are both raising inflation and impeding growth at the same time,” he said in a note, adding Canada could enjoy stronger growth and softer inflation in 2022 if the challenges eased.

The Bank of Canada expects inflation, which touched an 18-year high at 4.4 percent in September, to rise further this year and then average 3.4 percent in 2022, above its 1–3 percent control range.

The Canadian dollar was trading 0.4 percent lower at 1.2387 to the greenback, or 80.73 U.S. cents. Investors continued to price in a first rate hike in March.

By Julie Gordon and David Ljunggren