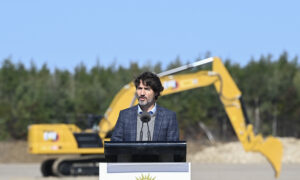 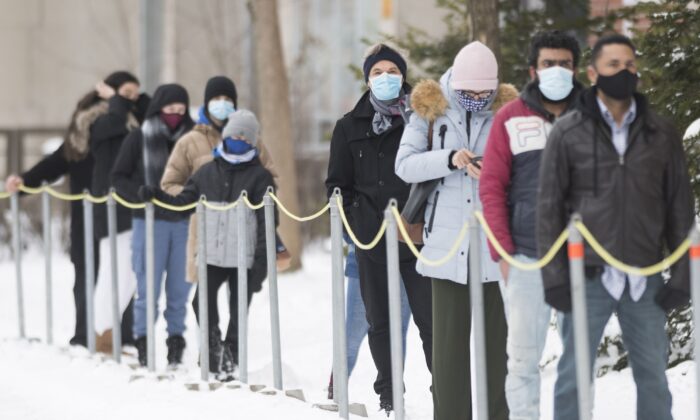 People wait to be tested for COVID-19 at a clinic in Montreal on Jan. 3, 2021. (The Canadian Press/Graham Hughes)
Canada

Public Health Didn’t Cite Input From Military Intelligence on Pandemic, Relying Exclusively on WHO Instead: Report

Canadian federal health officials did not cite early warnings about the threat of COVID-19 gathered from military intelligence, while appearing to rely almost exclusively on assessments from the World Health Organization (WHO), according to a CBC report.

The warnings were created by a specialized unit of the Canadian military in early January 2020. The unit exchanges classified medical intelligence with the United States and other close allies.

The formal exchange was designed, in part, for allies to alert each other of “strategic surprise,” such as pandemics and deliberate biological attacks, according to the report, and the threat assessment for the COVID-19 outbreak in China was based on classified allied intelligence weeks ahead of other open sources. Data coming from U.S. military sources provided to the network was producing “comprehensive assessments of the trajectory of the virus” as early as February 2020, the report said.

However, documents obtained by CBC News show the Public Health Agency of Canada’s (PHAC) COVID-19 rapid risk assessments contained no mention of the military’s warnings, despite the fact that these assessments were used to guide officials decision-making.

In addition, three of the five PHAC risk assessments, which were obtained by CBC under access to information law, show federal health officials relied almost exclusively on assessments from the WHO.

The revelations come as questions mount about what information Canada was using to inform its early pandemic response, if not its own military intelligence.

Canada’s repeated reliance on the WHO has often been questioned since the U.N. agency has been criticized for repeating Beijing’s talking points in the early weeks and months of the pandemic, despite evidence the Chinese regime was engaging in a coverup. In January, the WHO repeated Beijing’s claims that the disease could not be transmitted among humans—despite warnings from Taiwan to the contrary—and downplayed the seriousness of the outbreak.

The WHO also waited until Jan. 30 to declare the outbreak a global health emergency, while opposing travel or trade restrictions against China.

By Feb. 6 over 50 countries, including Australia and the United States, had announced travel restrictions on China. Yet, Canada waited until mid-March to impose travel restrictions, citing guidance from the WHO. This was praised by Beijing, while the regime slammed countries that restricted travel from China.

In April, despite reports that Beijing was falsifying its data around the outbreak in China, Health Minister Patty Hajdu said Ottawa had no reason to believe Beijing’s infection and death rates were altered, saying Canada relied on the WHO to coordinate the collection of data from various countries. When a reporter asked whether the WHO’s numbers could be trusted if China’s aren’t reliable, Hajdu accused the reporter of fuelling conspiracy theories.

Questions about what information Canada was using to inform its early pandemic response were also raised after media reports revealed the federal health agency’s early warning unit to flag potential pandemics was shut down just months before the COVID-19 pandemic crisis hit.

Hajdu ordered an outside review after it was revealed that the early warning system, known as the Global Public Health Intelligence Network, was shut down in May 2019, cutting off the system’s ability to raise the alarm about the onset of the pandemic in China.

In August, Canada’s Auditor-General also launched a separate investigation into the closure of the pandemic surveillance unit.