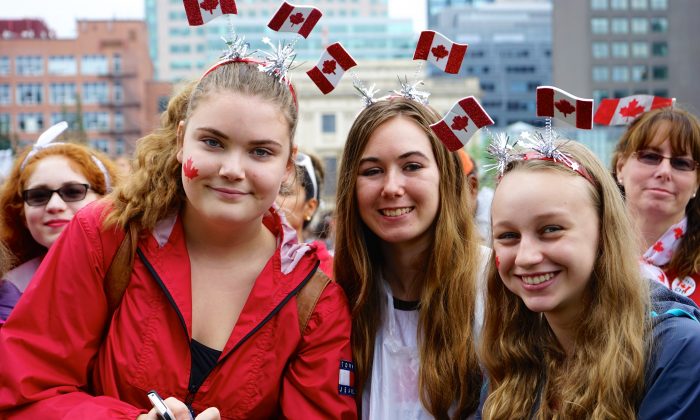 These three young women were among the many who celebrated Canada on Parliment Hill on July 1, the country’s 148th birthday. (Pam McLennan/Epoch Times)
Canada

OTTAWA—Canadians from coast to coast took part in a variety of events to celebrate Canada Day on July 1. In Ottawa, despite showers and cloudy skies, a sea of red and white dominated Parliament Hill as thousands turned out to mark the country’s 148th birthday.

The crowd was regaled with an outstanding line-up of performers from all parts of Canada, evoking this year’s theme: Strong. Proud. Free.

Prime Minister Stephen Harper touched on the theme in his speech, praising Canada as “a prosperous and optimistic country.”

“Ladies and gentlemen, the greatness of this country is no accident,” he said. “It is built on an unshakeable foundation of values: freedom, democracy, human rights and the rule of law, which is what draws people here from around the world.

“And those are the values for which our men and women in uniform put everything on the line, every day, in our defence,” he added, singling out the Canadian Armed Forces.

Governor General David Johnston called on Canadians to use their talents to give back to their country as its 150th birthday approaches in 2017.

“Let me issue a challenge to all Canadians,” he said.

“Let’s use our unique talents to build a better Canada, especially as we approach Canada’s 150th birthday. 2017, in less than a year and a half, is a wonderful opportunity to reflect, take stock, and imagine our future. As we look back, let’s look forward and let each give a gift to Canada—something that expresses our belief in a fair and just society for everyone who calls this land home. Now is the time to put plans in action to turn ideas into action, to act because the country we dream of won’t build itself.”

Teen pop singer Francesco Yates kicked off the entertainment in high gear with dancers and flags. Quebec singer Marc Dupré was next, followed by the freewheeling sounds of country singer Gord Bamford.

Canada’s first prime minister Sir John A. Macdonald also took the stage—no surprise given that July 1, 2015, is the 200th anniversary of his birthday—along with another Father of Confederation George Etienne Cartier, to debate the formation of Canada that made it the great country it now is.

Next up were the Jerry Cans, a band from Iqaluit, Nunavut, singing their upbeat music in Inuktitut and English that got the crowd singing along with them.

Andee (Andrée-Anne Leclerc) was next, then the hard rock sounds of Jonas and the Massive Attraction, followed by Kiesza, who played piano and sang.

Toronto’s reggae fusion group Magic! were the last group to entertain, and they left the crowd upbeat and cheering.