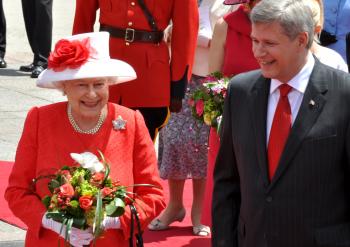 By Pam McLennan
biggersmaller
Print
OTTAWA—Canada turned 143 July 1 and the crowd on Parliament Hill was bigger than ever as royal watchers gathered to see HRH Queen Elizabeth II and Prince Philip join in the celebrations.

The Queen’s personal flag was flying high on the Peace Tower as she arrived in the usual horse-drawn carriage. She escaped the carriage early and did a short walk-about to greet some of the many Canadians waving flags and cheering her on. A 21-gun salute poured smoke over the crowd and dignitaries as the Queen inspected the guards who were in full regalia.

HRH was accompanied by Prince Phillip, Prime Minister Stephen Harper, his wife Laureen, and Minister of Canadian Heritage James Moore as she accepted a bouquet of flowers from a young “Brownie.” The dignitaries then walked the red carpet to the canopied seats to the right of the stage, arranged so that they could watch the show while allowing the audience to see the Queen.

Prime Minister Harper welcomed everyone and wished them Bonne Fête and Happy Birthday. His speech highlighted Canada’s solid economic situation and the unprecedented number of medals won by Canadian athletes at the Winter Olympics and Paralympics held in Vancouver earlier this year.

“The richness of the land first inhabited and fully appreciated by the aboriginal peoples. The steadfast determination and continental ambition of our French pioneers, who were the first to call themselves ‘Canadians.’ The courage and vision of the British adventurers and loyalists who brought with them our institutions and our freedoms under the Crown,” noted Mr. Harper.

“And of course, the faith of every immigrant man and woman, from every corner of the globe, who, with the world to choose from, has declared ‘I will be a Canadian.’ They have made us all the true north strong and free.”

On behalf of his family, Mr. Harper wished everyone a Happy Canada Day, closing his remarks with “God save the Queen.”

“Today we celebrate the history of Canada…Thank you for inviting Prince Philip and me to join you all on this special day,” she said.

The Queen remarked that during her lifetime she has been a witness to Canada for more than half its history since Confederation.

“I have watched with you in admiration as Canada has grown and matured while remaining true to its history, its distinctive character, and its values. This nation has dedicated itself to being a caring home for its own, a sanctuary for others, and an example to the world.”

These commitments have often been under “dangerous and hostile circumstances,” she said, adding that they “are undertaken with the support and respect of us all.”

Queen Elizabeth referred to Canadians’ success at the Vancouver Olympics as being more than just about the thrill of winning gold. It was also about “renewing a sense of common purpose within this country. The Olympics showed to others something of the extraordinary warmth and enthusiasm of the people, as Canada welcomed participants and audiences from around the globe.”

“Canadians have many reasons for optimism, even in trying times,” she added. “I wish you all the very happiest Canada Day. God bless you all and God bless Canada.”

After the entertainment and speeches, the Queen did a walk-about and made a lot of people happy as she took the time to greet and talk to them.

All in all it was a great beginning to a day of partying and celebrating that will last into the night—made all the more special by the presence of the 84 year-old monarch who doesn’t seem to age at all.