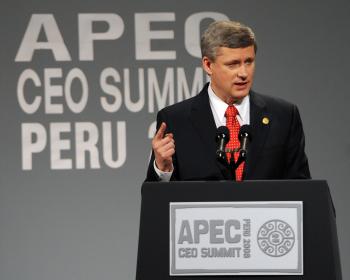 Canadian Prime Minister Stephen Harper approved the deal with Colombian President Alvaro Uribe shortly after he arrived in Lima ahead of the Asia-Pacific Economic Co-operation meeting.

“In a time of Global economic instability free trade is more important than ever,” said Harper, who has been promoting free-trade as a solution to the global economic downturn.

“By expanding our trading relationship with Colombia, we are not only opening up new opportunities for Canadian businesses in a foreign market, we are also helping one of South America’s most historic democracies improve the human rights and security situation in their country,” he said.

Colombia, a South American country with 44 million people, had a 7.5 percent GDP growth rate in 2007 and has forecasted growth rates of 4.7 percent for the next five years.

Two-way merchandise trade between Canada and Colombia summed to $1.14 billion in 2007, with Canada accounting for $661.6 million in exports and Colombia $473.6 million.

Under the labor agreement, Colombia agrees to respect and enforce labor standards such as elimination of child labor, forced labor and workplace discrimination, as well as freedom of association and the right to collective bargaining.

"More labor leaders are killed every year in Colombia than the rest of the world combined. And 474 labor leaders have been killed since Uribe took power in 2002," says Paul Moist, national president of Canadian Union of Public Employees.

Harper says the deal has provisions that will enforce human rights regulations.

“While there is no denying that Colombians continue to live with serious security challenges, the improvements we have seen over the last several years gives us much reason for optimism,” Harper said.

“Deepening both economic and political engagement between our countries is the best way Canadians can support the citizens of Colombia in their efforts to create a safer and more prosperous democracy.”

U.S. President George Bush has also been a proponent of free-trade agreement with Colombia however consideration for this agreement has been blocked in the Congress by the Democrats over concerns about violence against labor organizers. President-elect Barack Obama has also expressed that he is not in favor of a free trade agreement unless Colombia addresses this issue.