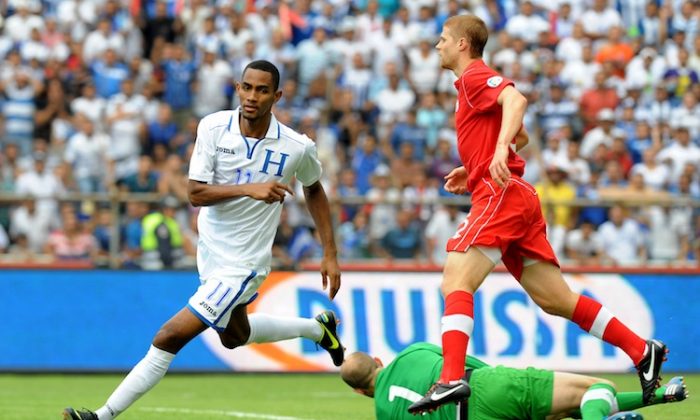 The Canadian men’s national team suffered a humiliating 8–1 defeat in Honduras, ending their hopes of qualifying for the 2014 FIFA World Cup in Brazil on Tuesday afternoon.

It was the Canadian men’s most important soccer game in 15 years. The objective: To get at least a draw in Honduras and qualify for the “hex” (the final round of qualification for the 2014 World Cup in Brazil).

With so much on the line, after all the hard work to control their own destiny in the final game of the penultimate stage of World Cup qualification, in San Pedro Sula, Honduras, the Canadian men were simply demolished.

They showed no fight, no emotion, and were completely overwhelmed by a spirited Honduran team that successfully reached the 2010 World Cup final in South Africa.

With less than half an hour played, the hosts were already up 3–0 and the dream was over. When all was said and done, Jerry Bengtson and Carlo Costly each had hat tricks and Mario Martinez had scored two goals.

Iain Hume scored Canada’s lone goal in the 76th minute when the visitors were already down six goals. Hume curled a nice free kick around the wall and in for a consolation goal, but that wasn’t really much consolation to Canadian soccer fans.

“We did not defend well individually, collectively,” Canadian head coach Stephen Hart told Sportsnet after the match. “Goals were preventable.”

Canada’s captain Kevin McKenna said at halftime: “We weren’t in the game. They punished us. It’s all about damage limitation now.”

Canada hasn’t fared well in hostile environments, which is part and parcel of qualifying out of the CONCACAF region. They were fortunate to lose by only 2–0 in Panama, and clearly, the mental strength to play through the adversity from the crowd, the heat, and the constant din of horns and drums has to be learned.

Another fatal flaw for Canada throughout the qualification campaign has been their inability to finish chances. Numerous chances were squandered in their 3–0 victory over Cuba last Friday in Toronto, which put them in a situation where they only needed a draw in Honduras.

“We got three goals tonight when, really and truly, we should have got six,” Hart told Sportsnet after Canada’s win over Cuba, showing that finishing was still a concern.

That lack of finishing let Honduras off the hook and contributed to Canada’s worst loss since 1993 when they were beaten 8–0 by Mexico.

Striker Tosaint Ricketts missed two glorious chances before Honduras ran away with the game. He could not control a high pass in the 6-yard box, and then off a Julian de Guzman shot that hit the post, he struck the rebound straight at the Honduran keeper.

But Ricketts is not solely to blame. The Canadian defence, which was the backbone of the team, had helped keep a string of five clean sheets at one point. But on Tuesday, they appeared casual, timid, and out of synch with each other.

Honduras has some very talented players playing in top leagues around the world. Buoyed by their home crowd, they were able to waltz through the Canadian defence at will.

The Honduran defence looked shaky in allowing Ricketts two early scoring chances, but after the second goal in the 16th minute, the hosts had all the confidence in the world and Canada started to hang their heads.

Hart took responsibility for the debacle and said he and the team would “ask the fans’ forgiveness.”

The embarrassing loss will do considerable damage to soccer in Canada, as the men’s national team will now take a backseat to whichever is the sport of the day. The men’s national program will need to rebuild since the majority of the core players will be past their prime for the 2018 World Cup.

The 2014 World Cup in Brazil would have been Canada’s last kick at the can with the current core group of players. It’s back to the drawing board from here.