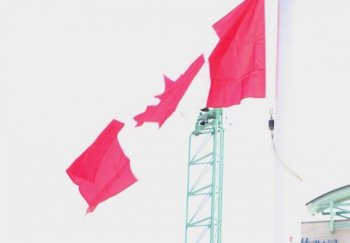 “Since it first appeared in 1965, our distinctive maple leaf flag has become a national icon. It is recognized both at home and abroad as a symbol of peace, democracy, freedom and courage,” Prime Minister Stephen Harper said in a statement.

“Forty-five years ago, the Maple Leaf flag was raised on Parliament Hill, across Canada, and at Canadian missions around the world for the first time. Today, our flag is cherished by Canadians and admired throughout the world as a symbol of freedom, democracy, rule of law, and human rights,” said James Moore, Minister of Canadian Heritage and Official Languages.

Mr. Moore, who was at the 2010 Olympic Winter Games in Vancouver, took part in a celebration at the Canada Pavilion in the host city.

In the nation’s capital, Jason Kenney, Minister of Citizenship, Immigration and Multiculturalism, attended a flag-raising ceremony at Ottawa City Hall.

“Flag Day is an opportunity to honour our history, as well as the sacrifices made in defence of our country under the flag and its predecessors, the historical flags of Canada. Since it was proclaimed by the Queen in 1965, the Maple Leaf flag has been Canada's most recognizable national symbol,” said Mr. Kenney.

Declared National Flag of Canada Day in 1996, Feb 15 provides an opportunity for Canadians to celebrate the flag and learn about its history and symbolism.

The National Flag bears the official colours of Canada, red and white, designated by King George V in the proclamation of the Royal Arms of Canada in 1921. The two colours are significant because since the 11th century they have been used time and again as the colours of either England or France.

Canada has used the maple leaf as an emblem since the 18th century. It was Dr. George Stanley, a professor at Royal Military College in Kingston, Ontario, who in 1964 suggested the single leaf design for the flag, since it can be seen clearly from a distance.

Canada’s maple leaf flag is widely regarded by flag experts as one of the world’s most beautiful flags because it has a simple design and only two colours.