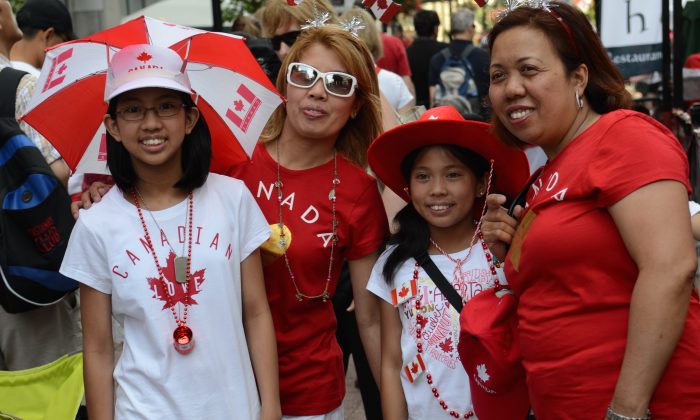 A family decked out in Canada Day attire stops to pose for a picture, July 1, 2014, in Ottawa. (Chrisy Trudeau/Epoch Times)
Canada

OTTAWA—Canada celebrated its national birthday today, marking the day a group of men, partaking in ample amounts of liquor, created a country out of three British colonies.

Their love of libations aside, the Fathers of Confederation, as the national political leaders of that day have been titled, turned several problems into one solution called Canada.

Among those problems was a British empire tired of defending Canada. Another was hungry Yanks intent on a “manifest destiny” to control all of North America. There was also gridlock in the political structure, making it impossible to deal with other problems of the day.

And so Canada was born. In keeping with its history, each year Canada marks the day with a giant party all across the country. Liquor is usually involved, but there are many family-friendly festivities.

The epicentre of those festivities is Parliament Hill in Canada’s capital city of Ottawa, Ontario. On July 1 every year, the front lawn of the national legislature plays host to hundreds of thousands of visitors, a third of them from out of town.

Here you will find a sea of red and white maple leaves scattered about on T-shirts and hats as far as the eye can see, and Canadian flags worn like capes.

It can get a bit rowdy as the night goes on and the family crowd swaps shifts with the 20-somethings looking to get their groove on as the bigger name musical acts take the stage.

But earlier in the day, the music pumping from videos on the sides of the stage has to compete with bagpipes as the Canadian Armed Forces Ceremonial Guard march to the lawn for the Changing of the Guard Ceremony.

If you’re wondering how they came up with the giant bearskin hats and red suits they wear, wonder no more. Those are British livery stolen right from Buckingham Palace and other fine locations around the United Kingdom.

Most Americans, and some Canadians, would be surprised to learn that Canada is still ruled by the Queen, at least on paper. It doesn’t count much in real life, but her representative in Canada, the current Governor General David Johnston, does get a nice set of horses to draw his carriage.

Canada is its own country, but it’s also a constitutional monarchy, which is why on Canada Day the national anthem is followed by another song, one about the Queen. If most Canadians need to lip-sync part of the national anthem, just about nobody knows the Queen’s song. The chorus is pretty easy though: something, something, the Queen. It’s good for a bit of pomp and ceremony in any case.

If the U.S. was the rowdy teenager that furiously stomped out of his parents’ house, Canada is the unassuming daughter that asked politely if she could go live down the street as long as she promised to come home every Sunday.

Maybe that rather demure origin is why Canada has always been more modest about its patriotism. You’d be hard pressed to find the Canadian flag on most Canadian streets. Most Canadians can even name more U.S. presidents than Canadian prime ministers thanks to Hollywood’s control over Canadian televisions and movie theatres.

But that could be changing. A recent Ipsos Reid poll found most Canadians want to see more patriotism, not less. Not that there’s a rush on to learn the lyrics to “Oh Canada,” even though it is the best national anthem ever.