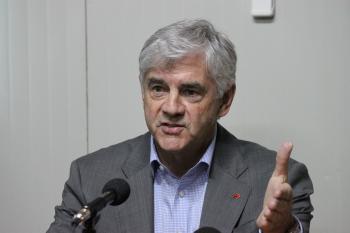 Canada Calls on Chinese Embassy to Give Back Journalist’s Passport

Matthew Little
Matthew Little is a multi-media reporter for The Epoch Times.
View profile
Follow
biggersmaller
Print
TORONTO—The office of Canadian Foreign Affairs Minister Lawrence Cannon has called on the Chinese embassy in Ottawa to return a Canadian journalist’s passport, which he said was withheld when he refused to provide details about his personal life in Canada.

Zhang Zhaopei applied for a visa to visit China from the Chinese consulate in Toronto on Friday, submitting his Canadian passport as part of the process. But when he went to pick up his visa, he was given a blank sheet of paper and told to list extensive personal information about his work, family, and personal history.

Mr. Zhang refused, saying he would abandon his visa application. But Zhang says he was told he still wouldn't get his Canadian passport back if he didn't provide the requested details.

“I never thought they can do this thing,” said Zhang, a reporter for New Tang Dynasty Television and a Falun Gong practitioner.

On Wednesday, a spokesperson for Minister Cannon said Canada had asked for the passport to be returned.

“We are aware that the individual in question had requested a visa on Friday to travel to China and that his passport has not been returned,” spokesperson Melissa Lantsman told The Epoch Times.

“A Canadian passport is the property of the government of Canada. We have made a formal request to the Chinese embassy that the passport be returned into our possession.”

Ms. Lantsman said her office had read Mr. Zhang’s story earlier this week in The Epoch Times and that the coverage had brought “much needed attention” to his case.

Zhang was attempting to return to China to visit his family who he has been unable to see in nine years.

Zhang had tried to return to China from Singapore in 2002 and 2004, only to be sent packing once he landed in Beijing and Shanghai, respectively. At that time, he was told it was because he practiced Falun Gong, a traditional Chinese meditation practice that became the target of persecution in China in 1999 and has since put up a spirited defence of human rights.

Mr. Zhang immigrated to Canada in 2005 and is now a citizen. He said he wasn’t surprised he was denied a visa this time around, though having his passport withheld did come as a shock.

New Tang Dynasty Television has encountered interference from the Chinese authorities in the past. The regime previously pressured a European satellite carrier to drop the station’s signal into China and has also attempted to exclude NTDTV from a press event inside Canada's Parliament Hill earlier this year.

NTDTV and The Epoch Times made headlines in the lead-up to the G-20 this June when a press conference with Prime Minister Stephen Harper and Chinese leader Hu Jintao failed to take place due to the regime’s insistence that both media outlets be prohibited from attending, a request the Parliamentary Press Gallery refused to accommodate.

Zhang said the information the consulate requested would have made it easier for the consulate to interfere and monitor his daily activities—something he didn’t want to facilitate.

Zhang told the consulate worker handling his case that if they didn’t return his passport, he would contact the police. A supervisor there told him to go ahead, he said.

Zhang did contact police, but both the Toronto Police and RCMP told The Epoch Times they were at a loss for how to handle the situation.

“This is an unusual practice; this is not something that we have heard of,” said RCMP Const. Dave Banham, a media relations officer.

Banham surmised that the situation was due to a misunderstanding but could not offer any specific reason the police would not get involved, instead referring the matter to Passport Canada.

Passport Canada said Monday the document should be returned to the Canadian government.

"The Government of Canada remains the owner of all passports and if it has been seized it should be handed over to Passport Canada," said Veronique Robitaille, spokesperson for Passport Canada.

Joel Chipkar, a spokersperson for the Falun Dafa Association of Canada, said the case was an example of the Chinese regime's interference in Canada.

"The Chinese regime needs to understand that it is not the government of Chinese Canadians, and the Canadian government should make this point clear once and for all."

Ms. Lantsman said the Canadian government has now provided Mr. Zhang a limited validity passport, which would allow him to travel “until the matter is resolved.”

The Chinese consulate did not answer repeated calls for comment.