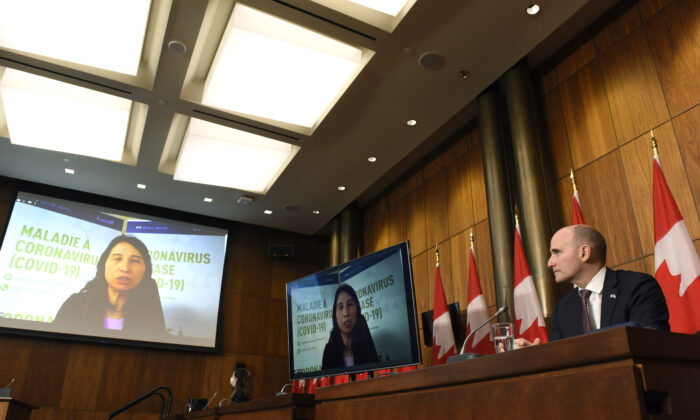 Minister of Health Jean-Yves Duclos listens as Chief Public Health Officer of Canada Dr. Theresa Tam appears via videoconference during a news conference on the COVID-19 pandemic and the Omicron variant, in Ottawa on Dec. 17, 2021. (The Canadian Press/Justin Tang)
Canada

The federal government is bringing back requirements for a pre-arrival COVID-19 test for all travellers coming to Canada, while lifting travel bans that had been placed on 10 African countries.

“We need to stay alert and ready to act on changing trends and new information,” Minister of Health Jean-Yves Duclos said at a press conference on Friday, as he announced two measures related to the rapid transmission of the new Omicron variant.

Starting Dec. 21, foreign travellers re-entering Canada from the United States or other international destinations will be required to provide negative results of a pre-arrival molecular COVID-19 test, done within 72 hours of departure.

According to the government’s global travel advisory, exemptions for a pre-entry test are limited to children under 5 years old, Canadians who are designated as “fully vaccinated” departing and re-entering the country within 72 hours, and certain essential services and cross-border communities.

“Now is not the time to travel,” Duclos said. “Once you have left the country, once you are stranded, once you are sick, there is little the Canadian government can do to help you.”

The health minister also announced that the ban on travellers from 10 African countries—Botswana, Egypt, Eswatini, Lesotho, Malawi, Mozambique, Namibia, Nigeria, South Africa, and Zimbabwe—will be lifted on Dec. 18 at 11:59 pm.

The public health officials announced the new measures along with a warning of a potential “strong resurgence” of the virus in the coming weeks, with the Omicron variant likely to replace the predominant Delta variant.

Roughly 350 confirmed cases related to the Omicron variant have been reported in 11 provinces and territories, according to Chief Public Health Officer Dr. Theresa Tam.

“Omicron cases have been reported in both vaccinated and unvaccinated people as well as in previously infected people,” Tam said.

“Increasing numbers of these cases are not linked to travel, signalling that community transmission has been established in several areas of the country with outbreaks occurring in multiple settings.”