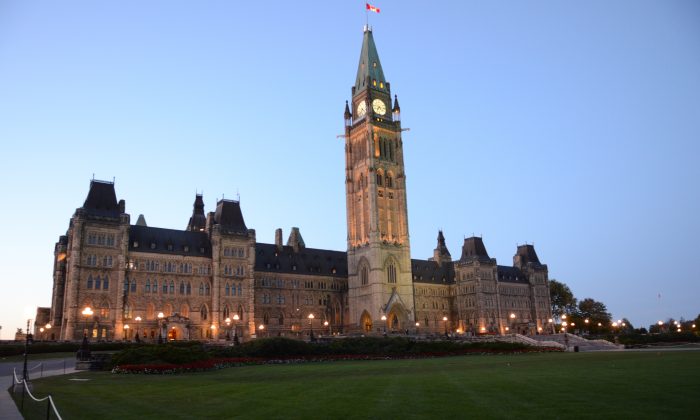 Canada's Parliament in Ottawa. Canada’s prostitution laws are being overhauled in Parliament after the Supreme Court ruled last December they were unconstitutional. (Matthew Little/Epoch Times)
Canada

OTTAWA, Canada—Just five blocks from Parliament Hill, tourists to Canada’s capital city will find a discreet massage parlor. A couple more blocks, and they aren’t so discreet anymore —glowing lights, suggestive titles, and a backdoor that lets customers in until 11 p.m.

Some will tell you nothing untoward is going on. Yet websites that rank such places have reviewers who say otherwise.

It’s business as usual for prostitution in Canada—but that could change.

Six months ago, Canada’s top court ruled that the country’s prostitution laws were unconstitutional because they put sex workers in physical danger by forcing them to carry out their business in secret. The court delayed its judgment for a year, giving the government until December 2014 to put new laws in place before the old ones get struck down.

Last week the government gave its answer: Bill C-36. If passed, it would shift the focus of current prostitution laws from going after prostitutes to instead targeting johns, pimps, and sex traffickers.

Prostitution itself isn’t illegal in Canada, but everything around it is, including talking about it or maintaining a residence to have sold sex in. The new laws leave that situation largely in tact, though prostitutes selling their own services will be allowed to advertise such, according to Bob Dechert, parliamentary secretary to the minister of justice.

“We don’t want to encourage sex business. We think it’s bad for the people who are in it, and bad for the communities it is carried out in,” said Dechert. “But we are not criminalizing the people who actually do those things themselves, because we view them as victims.”

It’s an approach that has found support in some quarters, particularly with groups that want to see prostitution suppressed in Canada, without cracking down on prostitutes themselves.

Some groups, however, said the bill does not go far enough. Diane Watts, with Real Women of Canada, supports the new bill though she would like to see prostitution itself criminalized, which it is not in the bill. She said liberalizing prostitution could bring other troubles.

“One thing that isn’t brought up very often is that in Europe, where the laws have been liberalized to some extent, the prostitutes are not women native to that country. … They’re from Eastern Europe; they’re from Africa; they’re from South America,” said Watts. “So it’s a form of exploitation of third-world women.”

Canada’s official opposition party has criticized the bill for not adequately addressing the problems with the current laws. Their focus has been demanding the government get it vetted by the Supreme Court.

“We’re saying very simply, refer this to the Supreme Court so we can see whether this is charter compliant and does it actually get the job done,” said Paul Dewar, a member of parliament for the New Democratic Party.

Members of parliament will study the bill in committee over the summer in order to get it passed by the December deadline. It’s possible the bill will be revised before it becomes law.