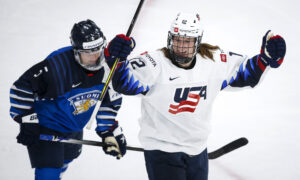 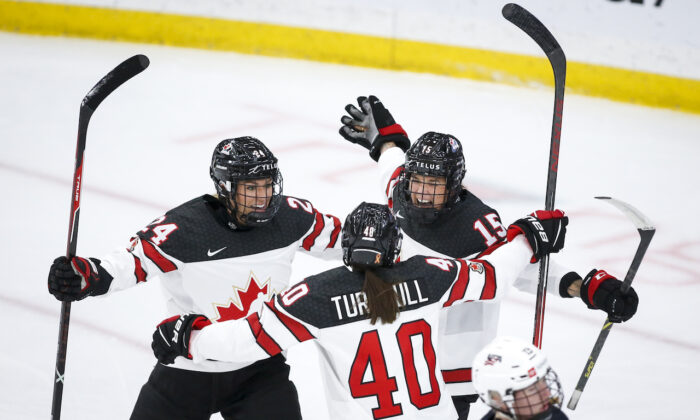 Canada (4–0) took the top spot in Group A to set up a quarterfinal Saturday against Germany, the third-place team in Group B after a 2-1 loss to Japan in the late game. The United States (3–1) will face Japan.

“It was a really fun game to be a part of,” Rattray said. “I’m proud of the girls and how we played together and stuck to our game plan. That was key to us. I think we did a really good job coming out strong, and we didn’t take our foot off the gas.”

Melodie Daoust, Renata Fast, and Sarah Nurse also scored to help 10-time champion Canada hand the United States its first loss in the event since the Canadians won 3–2 in a shootout on April 2, 2013. Ann-Renee Desbiens made 22 saves, allowing only Lee Stecklein’s goal early in the third.

“Obviously, not the game we were hoping for,” U.S. coach Joel Johnson said. “Canada played really well and I give most of the credit to them. By the time we generated any positive play, the game was kind of out of reach. We’re going to go back and try and fix what we can do because we are better than what we showed tonight.”

Daoust started the rout at 7:13 of first period, with the puck rebounding off the backboards and into the slot for her to hammer it past goalie Alex Cavallini.

Fast scored with 6:10 left in the first when she chipped the puck over the sprawling Cavallini and through a maze of sticks and defenders. Canada outshot the U.S. 15–4 in the period.

Rattray scored twice in a 2:58 span early in the second to break it open—and chase Cavallini. Seeing first-line action with captain Marie-Philip Poulin sidelined while recovering from a hard shot to the chest, Rattray made it 3–0 at 4:18, picking up a rebound off Brianne Jenner’s shot on a 2-on-1 break and slipping it inside the left post. Rattray then easily beat Cavallini to the post on a wraparound at 7:16.

“Any time I get out there I want to make an impact, whether that’s one shift or 10 shifts,” Rattray said. “You can’t really fill Pou’s shoes. She’s obviously a leader on this team and she has been for a long time, but I think we did a really good job. Everyone stepped up and did the roles that they needed to.”

Cavallini stopped 16 of 20 shots, with the U.S. only having five shots when she was pulled. Nicole Hensley took over in goal and gave up a short-handed goal on the first shot she faced when Sarah Nurse found the upper-right corner with 9:24 left in the period.

“I think this group is well on the way to really uniting and being a good group,” Canadian coach Troy Ryan said. “We were able to put four lines over the boards and seven D over the boards, and everybody was contributing to our team’s success. Right now, that’s the best thing that’s happening.”

Earlier, Petra Nieminen had a natural hat trick and added an assist in the first period to help Finland beat Switzerland 6–0. Finland (2–2) finished third in Group A to set up a quarterfinal against the Group B champion Czech Republic (4–0). Switzerland (0–4) will face Russia (1–3).

Japan (3–1) rallied to beat Germany, with Hanae Kubo and Hikaru Yamashita scoring in the second period and Nana Fujimoto making 18 saves. Kerstin Spielberger scored in the first period for Germany (2–2).

Canada and the United States met for the first time since Feb. 8, 2020, when the U.S. won 4–3 in overtime in Game 5 of the Rivalry Series in Anaheim, Calif.

The United States has won nine titles, winning the last five championships, eight of the last nine, and nine of the last 11. It outscored its first three opponents in Calgary 12–0, beating Switzerland and Finland 3–0 and routing Russia 6–0.

“We didn’t have our game today,” U.S. captain Kendall Coyne Schofield. “And it just continued throughout the game. Things didn’t go our way. We didn’t earn it, and we’re going to have to learn from it. They played a phenomenal game, and we didn’t.”