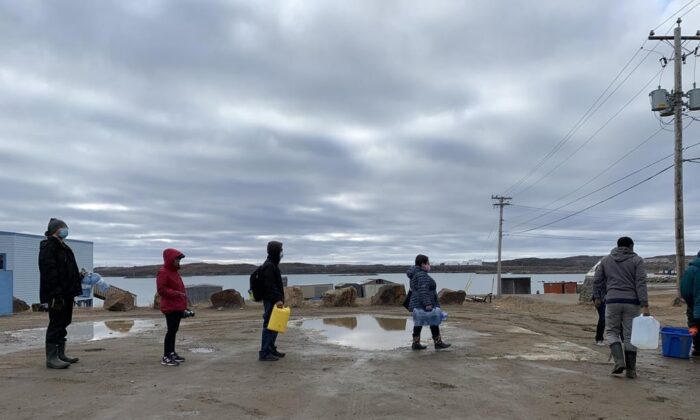 Residents line up to fill containers with potable water in Iqaluit on Oct. 14, 2021. (The Canadian Press/Emma Tranter)
Canada

IQALUIT, Nunavut—The federal government is sending the Canadian Armed Forces to help with the water emergency in Nunavut’s capital, and the work may include setting up a mobile water treatment plant.

In a tweet Friday, Prime Minister Justin Trudeau said he had spoken with Nunavut Premier Joe Savikataaq and that the military will be deployed to Iqaluit to co-ordinate and deliver clean drinking water.

The city’s 8,000 residents haven’t been able to consume tap water for 11 days, since it was discovered to contain fuel.

Iqaluit mayor Kenny Bell said the military will help set up the mobile plant but he didn’t offer details about how it would work.

The military has sent three to five people to Iqaluit to assess where it could put the mobile plant, he said. “Right now, it’s a little bit too early to say what they’re going to do.”

In an email to The Canadian Press, a spokesperson for the Canadian Armed Forces said it is “working with federal and territorial partners to finalize the details on our support to the people of Iqaluit” and couldn’t provide more information.

Iqaluit residents had reported a fuel smell in their water as early as Oct. 2. But the city said regular testing, for things such as bacteria, had come back clean.

On Oct. 12, workers opened a tank at the city’s water treatment facility and smelled fuel. Tests later came back positive for high concentrations of fuel in that tank.

Residents have been collecting water from the city’s Sylvia Grinnell River and picking up free bottled water from distribution sites.

The territory’s chief public health officer, Dr. Michael Patterson, has said that the health risks to residents who drank the city’s tap water are very low.

At a news conference Friday, he said residents may still smell fuel in their water even though the city has bypassed the contaminated tank.

When water is heated up or moved around, Patterson explained, the fuel smell becomes stronger even if the levels mean it’s not dangerous to consume.

The city said it’s still in the process of flushing the contaminated water from its system and residents need to clean their home’s water tanks.

Flushing is expected to continue into at least next week.

The city had originally said the process would take about 48 hours, but that another round of flushing needs to be completed.

Services at Iqaluit’s hospital have also been affected, as medical tools cannot be sanitized with the contaminated water. Nunavut’s health department said the hospital has so far postponed about 30 surgeries, eight urology cases and 28 dental procedures.

It’s still not clear how fuel got into the tank at the treatment plant.

The tank was bypassed, but hydrocarbons are still being found in the water, particularly in the city’s reservoir tanks, Elgersma said.

“They are presenting as hydrophobic and they tend to remain on the surface, which means they can be removed directly from those tanks using a vacuum system,” she said.

Environmental assessments of the ground around the treatment facility are ongoing, she added.

“We do suspect that contamination from the soil or groundwater from outside the plant has seeped into the water treatment plant,” she said.

Next steps will depend on those assessments, Elgersma said.

The city said it is also in the process of installing a real-time monitoring station to detect fuel in its water.