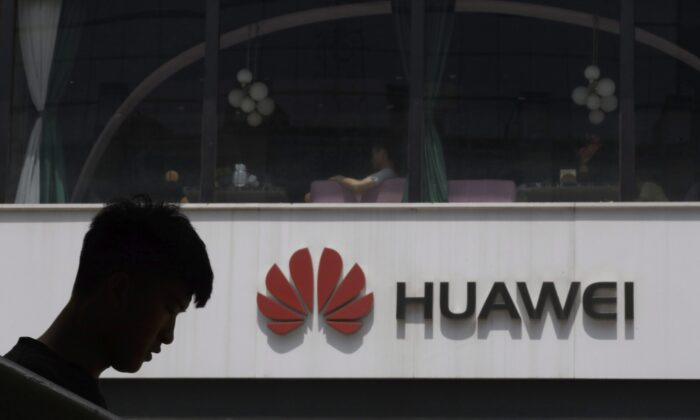 A Chinese man is silhouetted near the Huawei logo in Beijing on May 16, 2019. Conservative critics call for the federal government to ban the Chinese company from Canada's 5G network due to security concerns. (AP Photo/Ng Han Guan)
Thinking About China

Canada and the World Should Shut China’s Offshore Research Centers

Huawei’s R&D center in Ottawa would be a start

Canada is finally banning Huawei from its telecommunication networks. The company, based in China, allegedly has military and intelligence ties to the regime in Beijing. Ottawa, Canada’s capital, cited national security risks as the reason.

But the Canadian government of the leftist Liberal party is years late. The United States began restricting business with Huawei in 2019. Canada is the last of the Five Eyes alliance, which also includes the United States, Britain, Australia, and New Zealand, to impose the ban.

The slow pace of Canada allowed its telecom industry to purchase components from Huawei, which now has technology in approximately 10,000 cellphone sites across the country. Huawei components must now be stripped out at great expense to consumers and shareholders.

Taxpayers have also borne the cost of up to tens of millions of dollars in Canadian government subsidies over the years to buttress Ottawa’s attempts to attract approximately CA$600 million in Huawei research funding.

Despite banning Huawei technology from Canadian networks, approximately 1,500 Huawei employees remain in Canada. Most work in research and development. Some are likely Chinese nationals fully answerable to the totalitarian and genocidal Chinese Communist Party (CCP).

Huawei’s offshore employees, most likely including Canadian citizens, are paid salaries as much as double that of their peers to siphon the latest technologies from the West for transfer to China, according to a 2020 article in the peer-reviewed Journal of International Business Studies. The offshore Huawei researchers legitimize the company and provide it with greater political influence among Western governments, international organizations, and in standards setting, a critical field of competition for international market success.

To establish the office in Ottawa, Huawei took advantage of the 2009 bankruptcy filing of Canada’s Nortel Networks Corporation, according to the article written by Dr. Kerstin J. Schaefer. Nortel was founded in 1895 and worth 35 percent of Toronto’s TSE 300 Index in 2000, so it had extensive human and network capital available for the taking.

According to Schaefer, Huawei “appears to have been motivated by the bankruptcy of Nortel to open a facility in Ottawa where it was able to hire entire teams that lost their jobs.”

Schaefer’s article explained how Huawei’s absorption of Western technology goes much further than its Canadian operations. The company’s research centers in not only Ottawa but Munich, Stockholm, Dallas, San Jose, San Diego, Bridgewater, and Chicago are “far and away the most active” of all Huawei’s offshore research centers in the production of patents and scientific publications.

For many Huawei research centers, including in Ottawa and Munich, Huawei followed competitors’ locations, which provided “access to established infrastructure for a particular technology at a given location, such as university departments focusing on technology in which Huawei was interested.”

Nortel employees had few other options in the telecom industry if they wanted to stay in Ottawa, according to Schaefer’s article. Huawei offers salaries as much as double that of competitors, and perks like more professional freedom and the ability to hire teams of former colleagues.

“Between 2009 and 2013, Huawei started to expand its offshore R&D more rapidly and, early in this phase, major locations in Munich, Chicago, Bridgewater, and Ottawa started generating output,” according to Schaefer, who is now at the London School of Economics. “In addition, Huawei’s labs in Silicon Valley became more active around 2011.”

After 2014, and arguably due to its technology absorption from the West, Huawei overtook its global competitors in revenue.

While the U.S. government impeded Huawei from corporate acquisitions and banned it from national network projects, the company continued its technology acquisition and influence operations by focusing on Canadian, European, and Australian markets.

But Huawei’s influence went far beyond these regions. Many North American Huawei employees Schaefer interviewed “were from India or a country in South America, the Middle East, North Africa, or East Europe.”

According to Huawei’s LinkedIn pages, it is currently hiring for dozens of positions in Ottawa, including in procurement and technical recruiting, as well as C/C++ software developers, architects, and engineers in scientific and technical fields such as optical algorithms, fiber sensing, digital verification, performance modeling, network processors and protocols, and real-time operating systems.

Canada’s government and other democracies are likely hesitant to close Huawei’s offshore centers because of the high-tech jobs they provide. Few politicians want to take away jobs, and most want to support local high-tech industries.

But Huawei is not local, and allowing China’s companies to continue to absorb Western technology ultimately destroys more jobs than it creates. Huawei is not only buying technology with its research centers. It will put entire companies out of business with what should be considered stolen technology or the facilitation of theft. Huawei’s telecom business, across which global information flows, likely facilitates technology theft and industrial espionage on a much grander scale than just telecom technology itself.

So we should no longer allow companies like Huawei, which march to Beijing’s aggressive economic drum, to operate freely. No self-respecting country should support the CCP, and its totalitarian leader Xi Jinping, who are self-professed enemies of democracy and aspirants to global hegemony.

At the same time, citizens of democracies should not lose their jobs over the growing conflict with China’s regime. Instead, they can be hired into other industries or our national laboratories, given strict security checks, to keep doing their demanding work. This time, though, their work will support democracy rather than the world’s worst dictatorship.