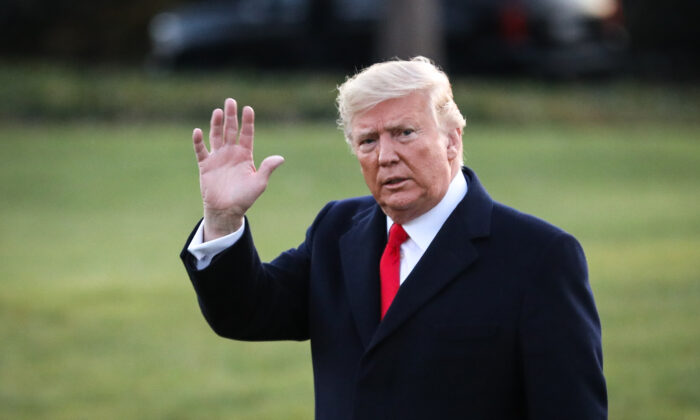 President Donald Trump walks on the South Lawn to board Marine One at the White House in Washington on Dec. 18, 2019. (Charlotte Cuthbertson/The Epoch Times)
Viewpoints

Can Trump Put Humpty Dumpty (the US) Back Together Again?

But I’m certain “beyond a reasonable doubt” that President Donald Trump, despite the inevitable hiccups, won’t be removed from office by the Senate and will win reelection next November.

But as much of a rough ride as the two hurdles might be, they are far from his most significant challenge. His real challenge, and it will be an extraordinarily difficult one, close to a 10 on the Richter scale, will be to put Humpty Dumpty—aka the United States of America—back together again.

Our society is riven as it hasn’t been since the Civil War. Families, friendships, and workplaces are all fractured. Although we are rich as never before and at peace (cf. Matt Ridley and Michael Barone), we are, just days into the year 2020, effectively two countries at each others’ throats.

Some say this is Trump’s fault: that his extreme rhetoric has driven us apart. To some degree, this is true, but the yet more substantial causes were and are his opposition in the Democratic Party, the FBI, the CIA, and the media—not necessarily in that order, but all working in tandem (entertainment and the academy helped, too.).

Reading the Justice Department inspector general’s report and the many intimations of what is going on with U.S. Attorney John Durham’s investigation, it’s clear that Trump was ganged up upon in an unprecedented, and quite likely illegal, way even before he was nominated, let alone elected.

A huge proportion of the electorate was prejudiced against him to such a degree that they were never able to listen to, and therefore even reasonably debate, his policies.

Much of the country began “acting out” against him in an almost-infantile manner immediately and haven’t stopped. The Mueller investigation and the impeachment were simply extensions of that, the acting-out played out in quasi-legal fashion.

America, right now, despite the aforementioned affluence and peacefulness, is a truly unpleasant place to live. We aren’t loving our neighbors.

The unfortunate result of this, despite its inherent unfairness, is that Trump alone can and must lead the way in curing the condition. No one else is in a position to do it and he can’t expect his enemies to help him, if past performance is any indication.

In order to really “make America great again,” so we can indeed live with each other, even if Durham indicts a half-dozen of his opponents, even if Trump wins a smashing victory in November, the president must resist two powerful temptations: vengeance and gloating.

He should be “the good father,” which he evidently is to his own children, not the angry or cheated man, which he is to his political opponents, justifiably or not.

This will be problematic for Trump, who thrives on confrontation, but he must do it. He could even begin that at his State of the Union address, lowering the temperature of the rhetoric.

Among his best assets is his humor; he’s arguably our funniest president. Poking fun at yourself is a time-honored way of defusing the opposition. He should exploit this at every opportunity.

And enough of the excessive bragging. Let others remind the world, at least most of the time, that the stock market is at an all-time high and unemployment at an all-time low, with wages going up for the first time in years.

Trump has said on several occasions that he can act the traditional presidential role. Undoubtedly, he can. But he doesn’t often enough. He should. And he should bring Melania, another great asset, along with him. (Everyone sees how she is abused by the MSM—a huge and obvious mistake on their parts.)

Of course, this is all a matter of shading. Trump should still be Trump. He can’t—and shouldn’t—be anyone else.

But he should keep Humpty Dumpty always at the forefront of his mind. The nursery rhyme character has clearly fallen from the wall. The president’s biggest job in his second term is to put him together again.

If he can do that to a reasonable extent—even making a dent won’t be easy—America could be greater than it ever was.

Roger L. Simon is The Epoch Times’ senior political analyst. His most recent novel is “The GOAT.”