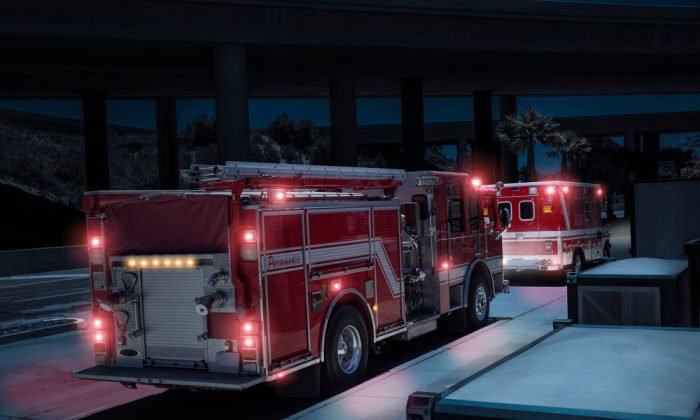 BRUNSWICK, Ga.—After their mobile home burned last year, the best Michael Reeves and Chassity Carter could do was to park a camper trailer on the same lot in coastal Georgia and make it their new home.

Now hardship has become sheer tragedy for Reeves and Carter. Less than a year after their mobile home burned, another fire Wednesday ravaged the camper the family had been living in, killing two of their children—3-year-old Blayden Wade Reeves and his 4-month-old sister, Tallie Ann Carter. Chassity Carter and 2-year-old Brighton Michael Reeves were hospitalized in critical condition.

“There was a pot of noodles left on a hot plate on a countertop that was the cause of the fire,” Glynn County Police Chief Matt Doering told reporters at a news conference.

Neighbors knew the young couple had a hard time making ends meet, said Danny O’Neal, who lives around the corner. So they would give Reeves and Carter food as well as bags of donated clothing for their three young children. O’Neal said he would offer Reeves scrap metal he could sell for cash and gave him a mattress for the camper.

“They have been struggling and struggling,” O’Neal said Thursday from his front porch just outside the port city of Brunswick, about 70 miles south of Savannah. He could hardly talk about the day before, when he ran outside to the sound of his neighbors screaming for their children.

A police officer dispatched to the scene, Eric Koenig, filed a report saying he found Michael Reeves “screaming and rolling around” in the street outside the burning camper where he lived. Chassity Carter was in a roadside ditch with burns on her arms and legs, the report said.

O’Neal said he could hear the couple outside wailing.

“I heard the worst screams you could ever hear between him and her, about their children being inside,” he said.

“That could be easily aerosol cans that make a loud noise and increase the fireball,” Jordan said.

Doering said police were initially suspicious because the family’s mobile home had been badly damaged by a fire last May. But he said there was no evidence of criminal wrongdoing in the fire at the camper.

“It was a travel trailer, which is unusual for a family to be living in,” Doering said. “It’s not designed for that, especially for a family of five.”