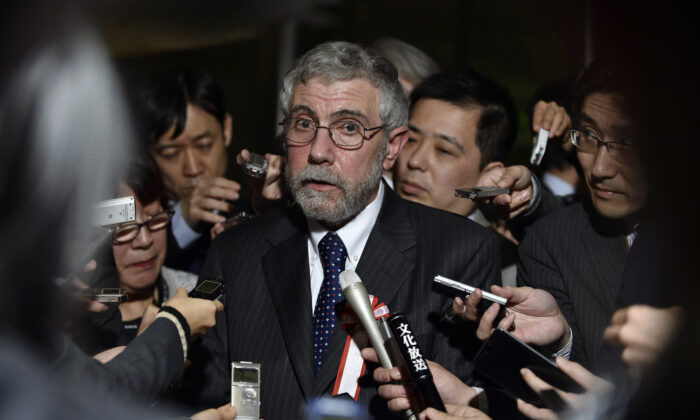 Calling the US Recession a Recession Is ‘Vitriolic’ Partisanship, Krugman Claims

New York Times columnist and economist Paul Krugman insists the United States is not in a recession, that the term is essentially meaningless, and current efforts to apply the label to the U.S. economy amount to “vitriolic” partisanship.

Krugman made the remarks in an interview on CNN’s “Reliable Sources” program that aired on July 31, days after the U.S. economy met the rule-of-thumb definition for a recession, with GDP coming in negative for two quarters in a row.

Host Brian Stelter kicked off the segment by asking Krugman whether the United States is in a recession and whether the term “recession” even matters.

“None of the usual criteria that real experts use says we’re in a recession right now,” Krugman continued.

“What does matter? The state of the economy is what it is. Jobs are abundant, although maybe the job market is weakening. Inflation is high, though maybe inflation is coming down. What does it matter whether you use the ‘r-word’ or not?” the economist added.

Debate has swirled around whether the U.S. economy has fallen into a recession after a 0.9 percent contraction in the second-quarter GDP, which followed a 1.6 percent decline in the first quarter.

Two negative back-to-back quarterly GDP prints are a common practical definition for a recession, according to numerous experts and economists.

Formally, however, recessions in the United States are declared by a committee of economists at the National Bureau of Economic Research (NBER), who use a broader definition than the two-quarter rule that considers a range of indicators—including employment—which has continued to grow.

The Biden administration has seized on the NBER’s criteria for declaring a downturn, insisting the economy isn’t in a recession.

Treasury Secretary Janet Yellen said recently that that “most economists and most Americans” define a recession as a “broad-based weakening” of the U.S. economy that includes businesses shuttering in significant numbers and mass layoffs.

“That is not what we’re seeing right now when you look at the economy. Job creation is continuing, household finances remain strong, consumers are spending, and businesses are growing,” Yellen said.

A number of experts and economists disagree with the White House view.

‘We’re in a Recession. Full Stop’

Asked whether he accepts the Biden administration’s insistence that the country hasn’t yet slipped into a recession, Jim Bianco, founder of Bianco Research, told the Real Vision Finance program in a recent interview that, while it may be “shallow,” it’s a recession.

Bianco said it may be reasonable to call the recession “shallow,” though he warned that the downturn could soon get ugly.

Bianco spoke of White House pushback during the Carter administration in the late 1970s against economists warning that soaring inflation could lead to a depression. Out of that controversy, the word “recession” was born as a softer way to refer to an economic slump, Bianco said, adding that current administration efforts to deny that the economy is in a recession amount to more of the same.

“It seems like we’re now in the process of finding a new word to mean exactly the same thing,” Bianco said. “This is not new. We’ve done this now for 90 years between White Houses and recessions. So yes, it’s a recession.”

In the CNN interview with Krugman, Stelter suggested that the debate between whether the economy is in a recession or not basically amounts to the White House following a time-worn strategy to downplay bad economic data while the administration’s political opponents do the opposite.

Replying, Krugman said that efforts to call the current slowdown a recession fall into a different category than standard debates.

“I would say that this is especially vitriolic,” Krugman asserted.

“I’ve been in this business for a couple of decades, and I get lots of hate mail and see stuff. I’ve never seen anything as bad as this. The determination of a lot of people to say it’s a recession is above and beyond anything I’ve ever seen,” he continued.

Asked what he thinks is driving this, Krugman chalked it up to partisan divisions.

“It’s partisanship. People want it. It’s the ‘Biden recession.’ They want their Biden recession. They’re going to have it, never mind the fact that … it’s not a recession in any technical sense,” he added.

Krugman’s remarks were met with a critical response by some prominent voices on Twitter.

Cameron Winklevoss, founder of Winklevoss Capital Management, said in a post on Twitter: “I’m having deja vu watching Mr. ‘I was wrong about inflation’ dismiss the recession. Krugman is perhaps the most intellectually dishonest ‘real expert’ out there. Of course corporate media continues to give him a platform to spread misinformation.”

Krugman, who earlier predicted that the current inflationary wave would be a short-lived “transitory” phenomenon, admitted in the interview on CNN that he was “wrong about inflation,” which has remained stubbornly high in the United States and in June hit a 40-plus year high of 9.1 percent.

“The inconsistencies have been especially large lately: GDP falling but GDI, which should be exactly the same, rising along with employment; industrial production up when the economy is supposedly down,” Krugman said in one of the posts.

“This kind of noise in the data explains why the NBER doesn’t rush to make recession calls, and relies on multiple indicators, not just GDP,” he continued.

“There’s a pretty good chance that we’ll eventually conclude that the economy, while slowing, actually grew” in the first half of 2022, Krugman argued.

By contrast, economist and investor Peter Schiff, founder of Euro Pacific Capital, told The Epoch Times in an earlier interview that he believes the United States is slumping into an “inflationary depression.”

“I think that the economic weakness is going to be so pronounced and over such a long period of time that it would not even do it justice to call a recession,” he said. “I think depression is going to be a more accurate description of what we’re going to go through.”

Schiff argued that the United States will spend most of this decade in a state of depression while, at the same time, “prices are going to rise much more in this decade than they did in the 1970s.”

Former President Donald Trump recently predicted that, under President Joe Biden’s watch, the U.S. economy is heading for not just a recession, but a full-blown depression.