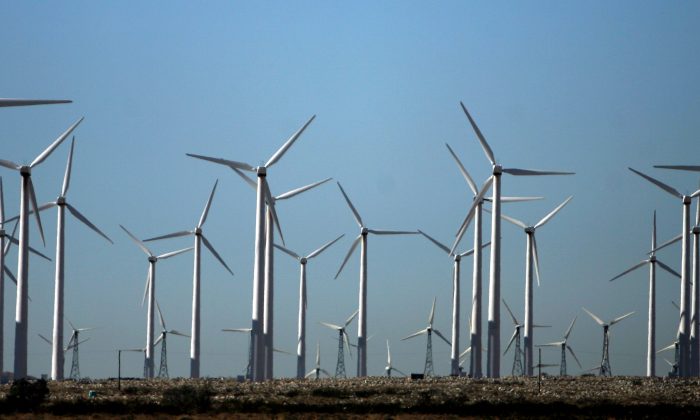 As California accelerates to a clean energy future state, officials are running into a stark reality: The transition to green energy is spawning an increasing frequency of blackouts and other electricity problems. Consumers read “Flex Power Alerts” on highway and freeway signs, but have little idea how precarious the problem has become, or why it’s spreading.

The tip of the iceberg resides almost completely with the issue of renewable energy’s “intermittency,” which refers to the unpredictable and erratic electricity production by wind and solar resources whose power output fails to match California’s minute-to-minute electricity demand variations. The resulting voltage imbalances across California’s electric grid manifest as blackouts.

Allowing for declining hydroelectric production attributable to drought, the last of which ended in 2016, today’s blackout issue was all but nonexistent until California began transitioning away from a steady flow of energy produced by baseload generators such as gas-fired power plants (pdf).

However, the days are numbered for these greenhouse-gas (GHG) emitting sources, ushered toward extinction as climate change sets the “clean” energy agenda. The blackout situation promises to worsen with Governor Newsom’s executive order mandating all new passenger vehicles sold in the state be zero-emission by 2035, ramping up the electric load on an already stressed system.

CCAs are growing throughout the state via their opt-out mechanism, where consumers are automatically switched into these so-called clean energy programs and then receive hybrid service—electrons from the CCAs, as well as transmission and distribution (including billing on behalf of CCAs) from the Investor Owned Utilities (IOUs). The switch is often so subtle, even covert, that many consumers are unaware that they are in a CCA program unless they scrutinize their monthly electric bill.

The opt-out feature was challenged many years ago in Sacramento with an attempt to change it to opt in (Bradford: AB 2145), but the CCA lobby complained that having to earn and build a customer base was a costly and unfair roadblock to the CCA agenda of taking over energy procurement and planning from California’s three IOUs: PG&E, Southern California Edison, and San Diego Gas & Electric.

Extrapolated data reported by National Renewable Energy Laboratory indicates that by the mid-2020s, CCAs will have taken 50–80 percent of IOUs’ energy service (production of the electrons), a range that is assured to grow because IOUs remain under the state’s thumb, whereas anything remotely construed as negative marketing about CCAs is all but nonexistent (pdf). IOUs are closely monitored by CCAs to assure the agencies’ continued inroads amid minimal competition. And even if you opt out, each time your house is resold or re-rented, it’s reenrolled into the CCA until the occupant opts out.

The advent of CCAs has created a myriad of issues, including instability of California’s electric system due to lack of capitalization and ability to bring generating resources to market, jeopardizing California’s continued flow of reliable electric power.

On July 1, 2021, 38 days after the industry’s first CCA bankruptcy (pdf), regulators had had enough.

California grid operator CAISO stepped out of its lane and took emergency action (pdf), procuring 1,000 megawatts of generating capacity to keep the lights on in California. Energy procurement is typically the purview of load serving entities such as IOUs and CCAs. In late July, Gov. Newsom, no longer able to ignore the electric reliability problem that grew under his tenure, declared a state emergency (pdf), looking for reliable (gas-fired) power wherever it might be found while giving hall passes to GHG emitting power plants whose carbon is reportedly causing climate change.

Most people care about how clean their energy is—that is, until they have no electricity in their homes or businesses, especially when their refrigerated food spoils. At that point they just want the lights to work.

Part of Newsom’s emergency action included suspending retirement of California’s coastal power plants that originally fell out of favor because they use once-through-cooling (OTC), drawing ocean water into their equipment to cool off components that are warmed during the production of electricity, before sending the warmed water back into the ocean.

Newsom remains committed to closing PG&E’s 2,200-megawatt Diablo Canyon nuclear plant in 2024 and 2025, which is also an OTC plant. When Diablo closes, land use comparisons of wind farms throughout the U.S. reveal that a replacement wind farm occupying nearly 500,000 acres will be required, plus another 2 or 3 same-size wind farms to charge batteries (that are currently technologically incapable of operating as needed to keep California’s power flowing over the course of several days, such as when the wind stops blowing).

Where are those 2 million acres? This is not to disregard the multiple duplicates of similar wind farms and solar farms that will be required as California forges ahead with its green energy vision, as California closes gas-fired generation because of GHG emissions and OTC concerns.

Lithium-ion batteries have their own “pollution,” including human rights issues involved in mining, battery toxicity during manufacturing, and battery disposal and recycling 8 or 10 years later, after batteries expire. According to Mining.com, China controls more than 80 percent of the world’s cobalt refining, a critical element in lithium-ion batteries.

California’s electricity future is bleak, and more so as the state becomes increasingly dependent on energy resources that even China dismisses in favor of its own coal-fired and nuclear-powered generation, most of which is designed as OTC. According to the Center for American Progress, a left-leaning think tank, China has constructed 246 gigawatts of coal-fired power—the equivalent of 123 Jim Bridger-sized power plants (pdf), the largest coal plant in the western U.S.

It has been said that the fossil-fired industry’s greatest customer is the clean energy industry. Green cannot fully carry the electric grid’s demand without baseload generation (fossil-fired and nuclear) spinning in the background, ready to pick up slack when clouds cast shadows over solar panels, or when the wind stops blowing. Evolving battery technology is cited as the savior to renewables’ intermittency problems, yet those in-development technologies don’t exist on a commercial scale nor do they have an in-service track record.

That reality is already seeping into CCAs … without a whisper to outsiders. The collective conscience of California has, to a great extent, embraced clean energy with unquestioned acceptance in the name of climate change. Insiders know that tipping that apple cart would needlessly upset the protected incomes of energy developers, lawyers, lobbyists, consultants, contractors, and CCA staff leaders—who reap financial windfalls from California’s new energy order, lubricated in large part by the billions of dollars that collectively flow through the state’s 24 (and growing) CCAs each year.

Green electricity champion, Marin Clean Energy (MCE), was California’s first CCA to successfully launch in 2010. MCE is cited as a glowing success to which all other CCAs should aspire. Ironically, part of that success is MCE’s stealth ability to control and recast what is happening.

In actual terms, MCE’s original Business Plan’s commitment to displace gas-fired generation is not occurring (pdf). The agency’s reliance on gas-fired power has boomeranged and accelerated in the opposite direction.

The situation is caused by two issues: first, California legislation such as SB 100 and SB 350, which result in a higher percentage of renewables being pushed into service at a pace faster than they can be integrated and dispatched onto the electric grid, and second by CCAs’ desire to outpace California’s annual clean energy mandates wherein brown power is rebranded as “clean energy,” achieved by slapping renewable energy certificates onto deliveries (pdf), a practice now largely halted by AB 1110. In both cases, a steady flow of electrons is required to keep the lights on, and that “steady flow” is system power (brown power).

Since mid-2015, MCE has executed more than $370 million of system power (brown power) contracts to make up, fill in, insure, hedge, and otherwise assure its steady supply of electricity. Brown power is the glue that keeps MCE’s boat afloat. MCE’s individual contract amounts and source documents are compiled here (pdf).

If “successful MCE” is having problems weaning itself from gas-fired power, it’s reasonable to conclude that all CCAs are struggling with the same issue. MCE and its brethren of “clean” CCAs may advertise (pdf) that they are putting renewable energy onto the grid, but they are not doing so without the giant crutch of fossil fuels (and suborned silence from their leadership).

For perspective, $370 million for system power purchases (pdf) is enough power to:

The Writing Was on the Wall

In 2015, MCE CEO Dawn Weisz executed a gas-fired power contract in the midst of claiming to ramp up MCE’s clean energy content. Weisz said the gas-fired power would “reduce greenhouse gas emissions” and “support local jobs,” the same promises (pdf) made years earlier when lobbying on behalf of renewables while telling everyone MCE would unhook from dirty and dangerous fossil fuels (pdf).

MCE flourished under the cover of positive editorials (pdf) written by a press incapable of addressing clean energy’s technical shortcomings, effusing about the agency’s substantial inroads against brown power (while MCE was busily executing millions of dollars of brown power contracts). MCE’s positive image fueled the launch of all other CCAs and perpetuated the carbon-free story. More to the point, per a compiled brown power contracts table, in footnote 4 (here (pdf)), the timing of MCE’s behind-the-scenes purchases of dirty power was at odds with its represented image to the public and to regulators.

Brown power is a required component of electric reliability. That truism combined with the reality of clean energy’s dirty supporting infrastructure, including the manufacturing and disposal of batteries, solar panels, and windmills, needs to be acknowledged and embraced. There are no free lunches. Otherwise we’re self-deceived by a very expensive and wasteful green energy illusion.