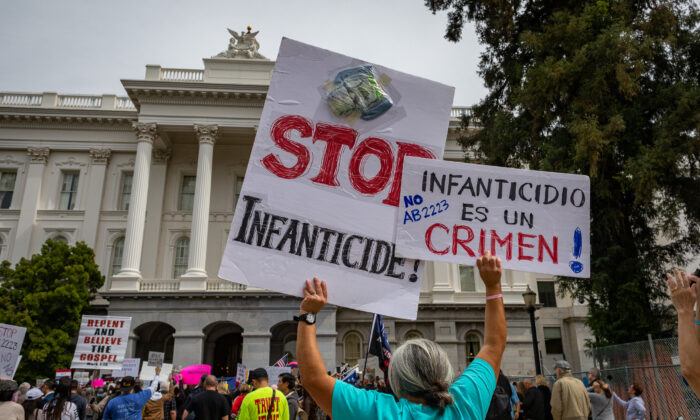 SACRAMENTO—On the steps of the California State Capitol over a thousand people recently gathered in the shadow of the building complex while several California Highway Patrol officers scanned the surroundings for potential threats under the cloudy skies.

“We are calling this a lobby day, not a protest,” Gina Gleason, director of Real Impact, a Christian activist organization, told The Epoch Times.

“’Protest’ is too aggressive for what we are doing.”

Many of those attending the rally had driven from Southern California, as well as flown into the Sacramento airport, to rally against the passing of Assembly Bill (AB) 2223.

State Assemblywoman Buffy Wicks (D-Oakland), who introduced the bill, said at an April 5 Judiciary Committee meeting that the bill is meant to prevent pregnant women from being prosecuted for terminating their pregnancy or losing their baby.

AB 2223 would prohibit holding a person—the mother or a health care provider—responsible for “miscarriage, stillbirth, or abortion, or perinatal death” of a baby based on “their actions or omissions” related to the pregnancy, according to the state legislative information website.

Although the bill doesn’t give a precise definition of “perinatal,” it commonly entails the time frame between 22 weeks of pregnancy and seven days after birth, according to the committee’s bill analysis.

“We’re talking about a bill that will not only terminate a child’s life, [but also] post-birth up to 30 days or longer,” Pastor Jack Hibbs, of Calvary Chapel Chino Hills, told The Epoch Times. “The law, if passed, prevents an investigation or an autopsy on why the child died. It is literally unbelievable, and that’s why yesterday when I was being interviewed by news crews from Australia, England, and Germany, they could not believe it either.

“[Wicks’s bill] may be coming from the best intentions, but I am here to tell you in Sacramento that it is not only wrong, it is unlawful regarding our First Amendment, and most importantly, it is a violation of God’s word,” Hibbs said.

“God is a God of life. It’s evident that the things that we enjoy in life are beautiful and precious, and we preserve them; but that you’re assuming the position of God—that you have no right.”

Just hours before the demonstration, hundreds attending the rally gathered in a conference area within the Hyatt hotel, adjacent to Capitol Park, to discuss the process of an assembly bill, and a breakdown of the language used to describe AB 2223.

“They say they are trying to protect women with this bill,” Gleason said. “But the bill describes the situation as ‘prenatal death’ as a result of pregnancy and birth as a ‘pregnancy outcome?’”

“We are urging the senate health committee to help make the right decisions.”

Greg Burt, of the California Family Council, a faith-based activist group, said to the large crowd that when he “heard the language of the bill, I could not believe how far they have gone.”

“This is a bill supporting abortions after birth … It’s infanticide.”

Burt, a former reporter, said though the bill itself does not mention the word “infanticide,” if passed, it would allow mothers the justification needed to end a child’s life after birth for “pregnancy-related causes.”

Burt said a “pregnancy-related cause” is ambiguous because it is “not defined” in the text.

“Postpartum depression is an example of a pregnancy-related [cause], meaning that a mother who’s depressed could kill her child, and there would be justification to do so,” he said.

Back on the steps of the California State Capitol, ralliers began to softly sing in sync together Amazing Grace, Jesus Loves the Little Children, and God Bless America.

“Some friends and I from church came up here today to oppose this bill together,” rallier Vanessa Le told The Epoch Times. “People need to be aware of how evil this bill is, and we need to do all that we can to stop it.”

“We are praying for our lawmakers to have their hearts opened to see the evil in this bill and its prevention of human life.”

When several members of California’s faith community approached the steps to speak out against the bill, the volume of the crowd decreased to hear them, as the audio equipment was outfitted for a rally of only 500 people.

Those in favor of passing the bill have been referenced as coming to unsafe conclusions supported by “fact-checked” sources.

“Despite the plethora of ‘fact check’ articles that have denied and downplayed the stark truth … the chief council for the pro-abortion majority of California State Assembly Committee on Judiciary stated that ‘the perinatal death language could lead to an unintended and desirable conclusion,’” said attorney Olivia Summers with the American Center for Law & Justice, a politically conservative, Christian activist organization.

“The analysis goes on to say the bill may not be sufficiently clear that perinatal death is intended to be the consequence of a pregnancy complication. Thus, the bill could be interpreted to immunize a pregnant person from all criminal penalties for all pregnancy-related outcomes, including death of a newborn for any reason during the perinatal period after birth including a cause of death which is not attributable to pregnancy complications.”

The crowd was encouraged to be polite in sharing their grievances with AB 2223 at the 4 p.m. Assembly Health Committee hearing on April 19.