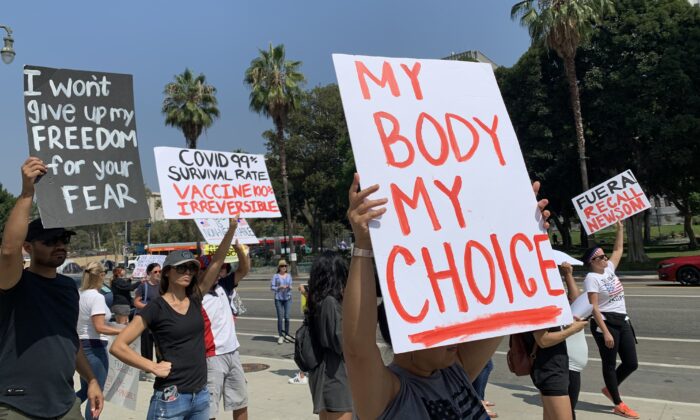 Almost 100 people gathered in front of the Los Angeles Police Department (LAPD) headquarters on Sept. 8 to protest the government’s policy of forcing frontline officers, such as police officers and healthcare workers, to be vaccinated against the CCP (Chinese Communist Party) virus.

California over the past few months has continuously attempted to implement a mandatory vaccine policy. On Aug. 5, California Department of Public Health officials demanded that all healthcare workers be fully vaccinated by Sept. 30, leading to the protest of hundreds of healthcare workers.

At the local government level, the Los Angeles City Council passed a mandatory policy on Aug. 18 requiring all employees, including those of the Police and Fire Departments, to be fully vaccinated by early October, except for those who had obtained exemptions.

At Wednesday’s protest, a plainclothes police officer, who asked to be anonymous, told The Epoch Times that LAPD officers are now in a similar position to health care workers in California, having to choose between “getting vaccinated” or “getting fired.”

Jessie Brewer, a local resident at the protest said that “the real pandemic, especially here in Los Angeles, is crime, homelessness, and drugs, and those are the things that we need our law enforcement to be able to engage in. We don’t need them to be worried about having side effects from unproven medical injections.”

Brewer mentioned the current vaccine is a ‘zero liability’ product, with vaccine companies protected from liability for death, disability, and serious adverse reactions that may occur after people have been vaccinated.

Since there are risks, she said, “please don’t make this mandatory, it should be everyone’s choice.”

Resisting the Policy: Some Nurses Don’t Trust the Vaccine

Another local resident, Katey T., told The Epoch Times she was against mandated vaccines.

“It’s a new vaccine, the clinical trials are not complete,” Katey, who works as a nurse, said, adding that she does not trust the vaccine. She said that there are too many cases of death or serious adverse reactions to the vaccine, and noted reports of young people who have been vaccinated suffering from the symptoms of rare forms of heart disease.

The Centers for Disease Control and Prevention (CDC) website shows that, as of Aug. 25, 1,377 cases of myocarditis or pericarditis have been reported to the Vaccine Adverse Event Reporting System (VAERS) in vaccine recipients aged 30 years and younger, with the majority being male adolescents.

Ken Hodge, a registered nurse with nearly 20 years’ experience, said, “To call it a vaccine is nonsense.”

“A vaccine will give you immunity to the actual virus,” he said. “It’s not giving you any immunity, it’s not killing it, you’re still able to spread it, you’ll still be able to get it. In my unit, I’d say a third to half of patients coming in are fully vaccinated, and they are still passing away.”

The Guardian reported on Aug. 10 that Professor Andrew Pollard, head of the Oxford Vaccine Group, gave evidence to members of Parliament that the vaccine had not stopped the spread of the coronavirus.

“We’re not having the death rate that the news is portraying,” Hodge, who remained at his post during the outbreak, said.

“People die from the flu every year. In the last 18 months, we have not had a patient come in with the flu. I don’t know how that has happened. COVID has miraculously gotten rid of the flu?”

Earlier, California lawmakers attempted to implement the AB455 vaccine passport proposal statewide, but it was temporarily deferred amid resistance from all sides.