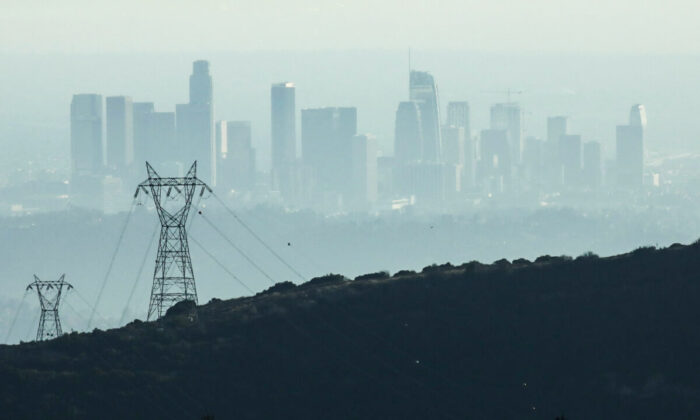 The buildings of downtown Los Angeles are partially obscured in the late afternoon, as seen from Pasadena, Calif., on Nov. 5, 2019. (Mario Tama/Getty Images)
Viewpoints

To Californians dealing with record inflation and the highest gas prices in the country, Gov. Gavin Newsom has an answer: The cause is climate change, and the solution is more government spending.

“California communities experience the devastating impacts of climate change every day,” he explained recently as he unveiled the “California Climate Commitment” plan. He bills it as the “Biggest Climate Investment in History.”

The first line of his recently unveiled plan states that “extreme weather is impacting our bills, our livelihoods, and our families; everything from energy costs to wildfires.” The plan coincides with President Joe Biden’s new spending plan to address climate change, which Democrats named with a straight face the “Inflation Reduction Act of 2022.” So, add inflation to the long list of the world’s problems that Democrats blame on climate change.

He proudly reports that the cost of this new commitment will be $53.9 billion. The plan proudly notes that this is “more than what most other countries are spending—to lead the world in fighting climate change.”

“Other countries?” Did Newsom just inadvertently leak California’s secession plan? Maybe. Or it simply reveals how Newsom thinks about California, not as a U.S. state but rather its own country. But a smart country would never cripple its own economy to fight a global problem, at least without corresponding commitments from other countries.

Obviously, California cannot solve climate change on its own. One state becoming “carbon neutral” within 18 years (by 2040), as Newsom has planned, would have zero impact on the world’s climate. Try this experiment at home: Take a look at a globe. Find California. Imagine no emissions coming from that part of the globe. Now apply common sense. Does it appear that the world’s climate would change as a result?

If you don’t have a globe at home, then just ponder this. The U.S. has been producing less air pollution, but smog levels are still rising in the West due to pollution from China and India drifting over the Pacific Ocean.

“Scientists found Asian air pollution contributed as much as 65 percent of an increase in Western ozone in recent years,” according to one NPR report.

Newsom’s response would no doubt be that his intention isn’t to unilaterally solve climate change, but to “lead by example.” In fact, he states right in the plan that it intended to make California “a model for action other states can replicate.”

At least here Newsom acknowledges that California is a state, not a country. But being a role model for other states accomplishes little without action by China, which is by far the world’s biggest polluter. Newsom hasn’t extracted anything in exchange from China for all his carbon reductions. And California consumers continue to gobble up Chinese-made products by the billions. Yep, the same products made with electricity generated by coal, which is polluting California’s air, while California bans the use of coal for its electricity.

The plan promises to “Protect Californians from extreme effects of climate change.” Item No. 1 in the plan is to “Bolster wildfire resilience.” California Democrats have been using wildfires as justification for massive climate change spending for the past decade. Newsom’s predecessor, Jerry Brown, started it. He said of California’s wildfires, “This is only the beginning. This is only a taste of the horror and the terror that will occur in decades.”

In fact, the state’s push for green energy has likely actually caused more wildfires. Its restrictions on the use of fossil fuels for electricity have put a huge economic and logistical strain on state electrical providers. It should be no surprise that they are now the biggest concern as the cause of wildfires. In 2017 and 2018, an estimated 30 wildfires were caused by electrical lines or transformers. But for California’s expensive green energy mandates, these companies could have afforded to move power lines underground, or at least insulate them, and take efforts to keep trees and branches as far away from them as possible.

California’s mandates for electric vehicles, and preference for electricity over gas, also has put a greater strain on electrical infrastructure. California’s failure to deal with its massive homeless crisis is another major cause of fires. The homeless were recently estimated to have caused 2,500 fires in Los Angeles in a single year. Experts also report that California has severely mismanaged its forests, putting out fires instead of allowing them to run their course, resulting in overgrown brush that result in huge wildfires.

Rather than providing simple, real-world solutions, Newsom would prefer to use wildfires to justify his new Climate Commitment and does so on the backs of ordinary Californians. His plan will cost each California taxpayer over $3,000, as well as further increasing the cost of their gas and energy, while accomplishing nothing.