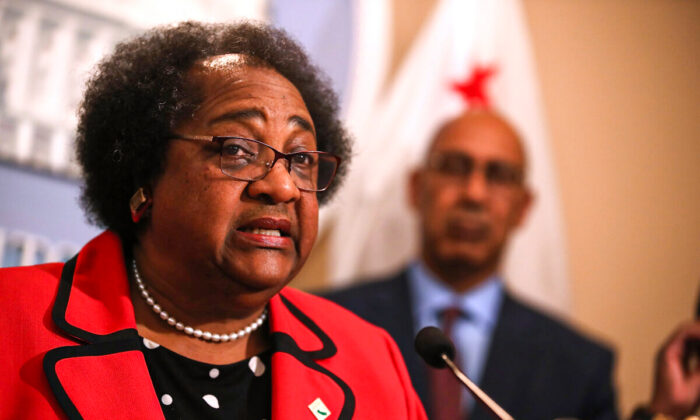 A conservative think tank filed a federal civil rights lawsuit against California to halt a law that will force quotas on publicly held corporations headquartered in the state, requiring them to appoint board members based solely on their race and sexual orientation.

The legislation at issue is the fruit of last year’s race riots that caused more than $2 billion in property damage and were organized nationwide by Black Lives Matter and Antifa.

The lawsuit, National Center for Public Policy Research (NCPPR) v. Weber, was filed on Nov. 22 in U.S. District Court for the Eastern District of California.

Defendant Shirley Weber, a radical left-wing academic before entering politics, is being sued in her official capacity as California secretary of state. Until January of this year, the San Diego-area Democrat was a member of the California State Assembly, where she championed AB 3121, a law creating a task force to develop proposals to pay reparations to blacks to compensate them for having ancestors a century and a half ago who were enslaved.

California has an “ugly past,” and its “systemic injustice” needs to be confronted, she said when her bill became law last year.

The NCPPR is a pro-free market research and shareholder advocacy organization. It’s being represented in the legal proceeding by Sacramento-based Pacific Legal Foundation (PLF), which argues that the new law, known as AB 979, perpetuates discrimination by treating people based on their immutable characteristics, and not as individuals.

Since 2020, the state law known as SB 826 has required that all publicly held corporations headquartered in California meet a quota of female board members or face fines. PLF client and shareholder activist Creighton Meland is challenging SB 826 in the same U.S. district court. The state tried to have the case dismissed but the U.S. Court of Appeals for the 9th Circuit unanimously determined that a shareholder of a California company has standing to sue over the law.

Beginning next year, AB 979 will require the affected corporations to meet an additional quota for board members based on race and sexual orientation.

The NCPPR disagrees about using government coercion to enforce diversity.

The problem is “these diversity quotas apply to all businesses across every industry in perpetuity, regardless of whether there is any specific evidence of discrimination,” the organization states in its legal complaint.

“These laws, which dole out benefits and impose burdens on the basis of race, sex, and sexual orientation, are unconstitutional.”

PLF attorney Daniel Ortner said that by the end of the current year, all publicly traded corporations headquartered in California will be required “to have one racial minority or LGBT individual on their board.”

“What’s happening is the state of California has decided that they can intervene and force private companies to impose race quotas and sex quotas and all kinds of quotas,” he told The Epoch Times in an interview.

Under AB 979, any “publicly held domestic or foreign corporation whose principal executive offices … are located in California” must have “a minimum of one director from an underrepresented community on its board” by Dec. 31, the petition states.

The National Association of Scholars (NAS) welcomed the new lawsuit.

“Laws like these often begin with good intentions, but quickly get out of hand. If this law is left to stand, we might as well throw in the towel on the Civil Rights Act of 1964,” Layton told The Epoch Times in an emailed statement.

“Race or sex discrimination should never be practiced by an American government. California’s legislature … have already shown their desire to discriminate and act with prejudice last year in the fight over Proposition 16. That ballot measure was defeated, thankfully, because regardless of what those in power believe, the people understand that allowing the state to discriminate based on unchangeable attributes of individuals is fundamentally wrong.”

When she was an Assemblymember last year, Weber introduced the legislation that would become Proposition 16, which would have repealed the state constitution’s ban on race-based and sex-based affirmative action, according to Ballotpedia.

Weber’s office didn’t respond to a request for comment by the time of publication.