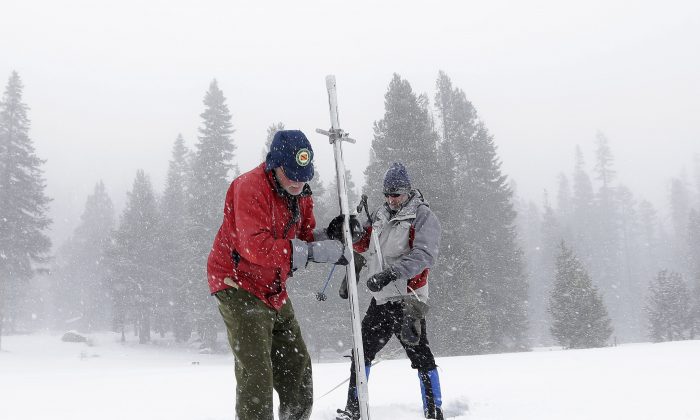 Frank Gehrke (L), chief of California Cooperative Snow Surveys Program for the Department of Water Resources, pulls the snow depth survey pole from the snow pack as he conducts the first snow survey of the season at Echo Summit, Calif., Tuesday, Dec. 30, 2014. The survey showed the snow pack to to be 21.3 inches deep with a water content of 4.8 inches, which is 33 percent of normal for this site at this time of year. At right is Dave Schmalenberger, of the Eat Bay Municipal Utility District, who accompanied Gehrke on the survey. (AP Photo/Rich Pedroncelli)
US

ECHO SUMMIT, Calif.—The winter’s first survey of the Sierra Nevada snowpack on Tuesday found more snow than last year at this time, but officials said much more is needed to end the California drought.

The Department of Water Resources conducted the survey at an elevation of about 6,800 feet some 90 miles east of Sacramento.

Frank Gehrke, chief of the California Cooperative Snow Surveys Program, said there were 21.3 inches of snow on the ground after recent heavy storms.

It was more snow than this time last year, but the water content was still far below average for the date.

California’s snowpack supplies about a third of the water needed by state residents, agriculture and industry as it melts in the late spring and summer.

“California needs much more rain and snow than we’ve experienced over the past two years to end the drought in 2015,” said department Director Mark Cowin. “The department encourages Californians to continue their water conservation practices.”

After three years of drought, most storms that drenched the state this month have been powerful but relatively warm, delivering above-average rainfall to most of the state while providing a modest early winter snowpack.

The water content of the snow measured Tuesday was about 33 percent of average.

Statewide, 105 electronic sensors in the Sierra detected a water content of about 50 percent of the multi-year average for the day. That compares favorably with last winter’s first survey, when the snowpack water content statewide was only 20 percent of normal, which tied with 2012 as the driest readings on record.

Tuesday’s readings indicate that water content in the northern mountains is 20 percent of the average on April 1, when it normally peaks before the spring melt.

The Department of Water Resources and other agencies conduct manual snow surveys around the first of the month between January and May to check the accuracy of real-time electronic readings.

More snow is good news for those heading to the mountains to celebrate the arrival of 2015.

“Skiers have certainly enjoyed the early season snow storms, and cold temperatures have offered ideal conditions for snowmaking,” said Rachael Woods, a spokeswoman for Northstar California Resort. “We’ll ring in the New Year with fresh snow on the slopes.”

The company operates the Heavenly, Northstar and Kirkwood facilities in the state.