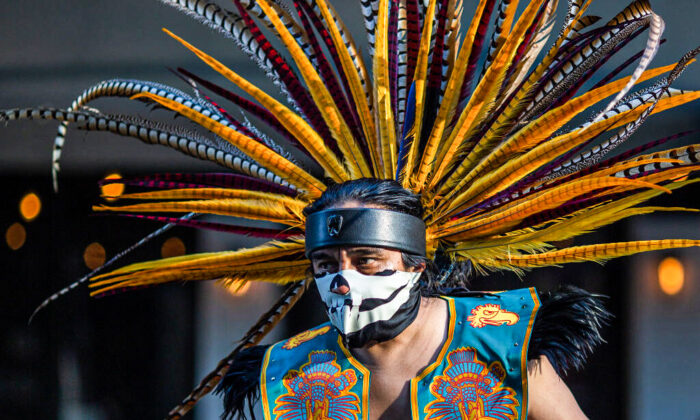 An Aztec dancer participates in a march in Los Angeles, on May 1, 2019. David McNew/Getty Images
Education & Family News

State entities to publish public notice to all school districts about the changed policy; state to pay 100K in attorney fees
By Matthew Vadum

California education authorities have agreed to drop a policy encouraging public school students to pray to Aztec gods in response to a lawsuit filed months ago by angry parents.

Among Aztec religious practices were the cutting out of human hearts and the flaying of victims and the wearing of their skin.

Paul Jonna, partner at LiMandri & Jonna LLP and special counsel for the Thomas More Society, a national public interest law firm, said the “Aztec prayers at issue—which seek blessings from and the intercession of these demonic forces—were not being taught as poetry or history.”

Rather, the California State Board of Education’s nearly 900-page Ethnic Studies Model Curriculum (ESMC) “instructed students to chant the prayers for emotional nourishment after a ‘lesson that may be emotionally taxing or even when student engagement may appear to be low.’ The idea was to use them as prayers,” said Jonna, one of the lawyers for the plaintiffs.

The launch of the ESMC made California “the first state in the nation to offer a statewide ethnic studies model for educators,” the board boasted on March 18, 2021, when the curriculum was adopted.

“California’s students have been telling us for years that they need to see themselves and their stories represented in the classroom,” state Superintendent of Public Instruction Tony Thurmond said at the time. “Today’s historic action gives schools the opportunity to uplift the histories and voices of marginalized communities in ways that help our state and nation achieve racial justice and create lasting change.”

The ESMC contained a section on “Affirmation, Chants, and Energizers.” Among these was the In Lak Ech Affirmation, which calls upon five Aztec deities—Tezkatlipoka (God of the Night Sky), Quetzalcoatl (God of the Morning and Evening Star), Huitzilopochtli (God of Sun and War), Xipe Totek (God of Spring), and Hunab Ku (God of the Universe). The pagan prayers address the deities both by name and traditional titles, recognize them as sources of power and knowledge, invoke their assistance, and offer thanks.

According to the plaintiffs’ lawyers, even after the settlement, the ESMC “is still deeply rooted in Critical Race Theory (CRT) and critical pedagogy, with a race-based lens and an oppressor-victim dichotomy.” The Aztec chant component demonstrated “the politicized championing of critical consciousness, social justice, transformative resistance, liberation and anti-colonial movements in the state-sanctioned teachings of ethnic studies.”

But Frank Xu, president of Californians for Equal Rights Foundation (CERF), a nonprofit organization that is one of the plaintiffs, said the settlement gives him hope.

“We are encouraged by this important, hard-fought victory,” Xu said in a statement.

“Our state has simply gone too far in attempts to promote fringe ideologies and racial grievance policies, even those that disregard established constitutional principles. Endorsing religious chants in the state curriculum is one glaring example,” he said.

“To improve California public education, we need more people to stand up against preferential treatment programs and racial spoils. At both the state and local levels, we must work together to re-focus on true education!”

The lawsuit was filed Sept. 3 in the Superior Court of California, County of San Diego, by the Thomas More Society, as previously reported. The plaintiffs argued that the ESMC constituted an impermissible governmental endorsement of the Aztec religion.

According to the legal complaint, the State Board of Education appointed R. Tolteka Cuauhtin, a co-author of the 2019 book “Rethinking Ethnic Studies,” to chair a panel to develop the ESMC. In his book, Cuauhtin “demonstrates an animus towards Christianity and Catholicism—claiming that Christians committed ‘theocide’ (i.e., killing gods) against indigenous tribes.”

Sociocultural anthropologist Alan Sandstrom, an expert in the culture, religion, and rituals of Mesoamerican peoples, told the court the In Lak Ech Affirmation “is a modern creation that borrows elements of the Aztec religion. It would be of no real value in learning about the Aztec people or culture of the past or today.”

In the settlement agreement, the California authorities didn’t admit wrongdoing but agreed to remove the In Lak Ech Affirmation and the Ashe Affirmation from the Yoruba religion from the ESMC.

Yoruba is “an ancient philosophical concept that is the root of many pagan religions, including Santeria and Haitian vodou or voodoo,” according to the Thomas More Society. It reportedly has 100 million believers worldwide in West Africa, Brazil, Colombia, Cuba, Puerto Rico, Guyana, and in Caribbean nations.

The settlement provides that the California Department of Education and the board will pay the plaintiffs’ lawyers $100,000, “representing a payment toward Plaintiffs’ attorneys’ fees incurred in connection with the Action.”

The two state entities will also issue a public notice to all California school districts, charter schools, and county offices of education about the changed policy, and they agreed not to encourage the use of the two challenged chants in California public schools.

Jonna told The Epoch Times via email that this is “a major victory in the fight to restore sanity in California’s public schools.”

“There is still much work to do—and our team will continue to monitor developments and be prepared to file new lawsuits when necessary.”

The Epoch Times reached out for comment on the settlement to California’s Democratic Gov. Gavin Newsom, California Attorney General Rob Bonta, the California Department of Education, and the California State Board of Education but didn’t receive a reply from any of them as of press time.