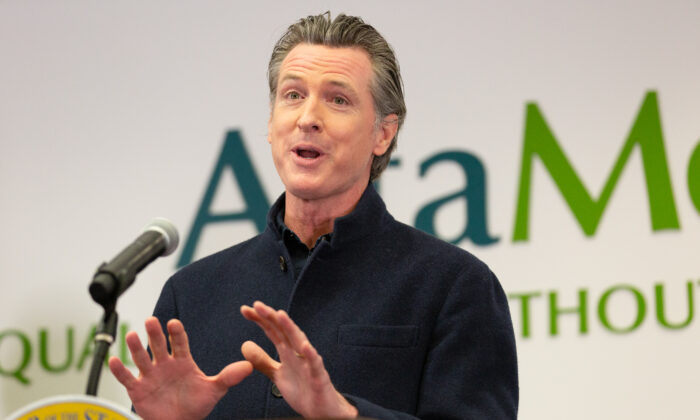 Following the Supreme Court’s overturn of Roe v. Wade, many states have moved to either further restrict or expand abortion access, with California chief among the latter.

Having recently passed a spate of laws to cement abortion protections for residents and so-called abortion tourists, the state has positioned itself as a sanctuary for abortion seekers nationwide. However, according to one pro-life attorney, the true motive behind the legislation was more commercial than compassionate.

“It’s horrific what the California Legislature has done,” said Susan Swift, vice president of legal affairs for the Right to Life League. “What they are doing … it’s like, Detroit used to be known for producing cars, right? Well, California is building an abortion industry. They are funding it actively.”

Founded in 1967, the Right to Life League provides support to a network of pro-life clinics, pregnancy centers and maternity homes.

Noting that another aspect of the nonprofit’s mission is lobbying against pro-abortion legislation, Swift described one recently passed bill, SB 1142, as California’s “master plan” for becoming a hub of abortion tourism, or travel to obtain an abortion.

“[The bill] funds travel to the state, it funds lodging in the state, lost wages … and it even funds child care for anyone who wants to come to California for a free abortion,” she said.

The bill—which declares California’s commitment to “reproductive freedom”—asserts the necessity of an increase in state funding for abortion providers, organizations that fund abortions, and those that offer “practical support” to assist residents and nonresidents seeking abortions in the state.

Additionally, the bill calls for the creation of a website that features information about available abortion services across the state.

Although abortion tourism is not a new concept, following the Supreme Court’s 1973 Roe decision, the number of women traveling for an abortion trended downward. However, abortion travel has increased in recent years as certain states began tightening restrictions in anticipation of a possible reversal of the landmark ruling.

According to the Guttmacher Institute, the percentage of women nationwide who crossed state lines to obtain an abortion rose from 6 percent in 2011 to 9 percent in 2020, with the largest percentage recorded among states with the strictest abortion laws.

However, according to Swift, pro-life legislators were not the only ones making moves in preparation for the court’s monumental decision.

“Forty abortion companies got together and said, ‘What do we need to do to centralize our business model in California?’” she said. “And that’s what this is. SB 1142 creates a one-stop-shop website that lists all abortion providers.”

Although the bill has yet to be signed by Democratic Gov. Gavin Newsom, the website is already up and running. On Sept. 13, Newsom announced the launch with a video message on Twitter, touting the site as a resource for abortion seekers nationwide.

Swift, however, said the website could face legal challenges if it promotes pro-abortion centers over those that are pro-life.

The website excludes information for pro-life clinics and pregnancy centers, cautioning users that such organizations may share “fake abortion information.”

“Search results online may include clinics that do not perform abortions,” the website warns. “These ‘clinics’ may provide false, medically inaccurate information online or in person about abortion to convince you not to have an abortion. They are sometimes called crisis pregnancy centers (CPCs).”

For more information, the website links to a Planned Parenthood webpage that, among other assertions, states that a clinic that does not perform abortions or offer “effective birth control methods like condoms or the pill”—things that, for instance, a Catholic organization would not provide—is “probably not a real health center.”

Swift said the bill will essentially make abortion a “state-sponsored business,” adding that the website could constitute a violation of section 17200 of the California Businesses and Professions Code, which prohibits “unlawful, unfair or fraudulent” business practices and “unfair, deceptive, untrue or misleading” advertising.

Further, the state’s decision to financially favor abortion clinics over pro-life facilities could also violate the state’s constitution, according to the attorney.

In 1981, the California Supreme Court held in Committee to Defend Reproductive Rights v. Myers that “when the state finances the costs of childbirth, but will not finance the termination of pregnancy, it realistically forces an indigent pregnant woman to choose childbirth even though she has the constitutional right to refuse to do so,” ruling that such unequal funding was unconstitutional.

Referencing this ruling, The Right to Life League in a statement argues that to fend off any constitutional challenge, Newsom should provide an equal amount of funding to childbirth and post-natal maternal support.

Another legal concern Swift raised was that several of the state’s other recent abortion bills seek to hinder other states’ law enforcement investigations concerning abortion.

“AB 1666, AB 2091, AB 1242—all of them forbid California from complying with other states’ valid court decisions,” the attorney said, adding that those laws were likely to be struck down as a violation of the U.S. Constitution’s Full Faith and Credit Clause.

One of those questions, she said, was, “Why are we spending taxpayer dollars to kill people?”

Particularly, Swift decried AB 2223, which some pro-life organizations have referred to as the state’s “infanticide bill.”

Among other changes, AB 2223 eliminates the coroner’s duty to investigate perinatal deaths  “related to or following known or suspected self-induced or criminal abortion.”

The bill also authorizes a woman who had an abortion—legal or otherwise—and anyone who assisted her to bring a civil lawsuit against any state actor who attempts to investigate.

“The League has fought this thing every which way because it removes all civil and criminal liability for abortions, miscarriages, stillbirths and, most importantly, any perinatal death ‘due to causes that occur in utero,’” she said, adding that those “causes” could include a botched abortion.

The bill does not define what is meant by “perinatal death,” but according to California’s Health and Safety Code, “perinatal care” includes care received from conception through one-year post-birth.

“Nobody’s going to want to risk the lawsuit of investigating [a death],” Swift said. “And it’s going to cover up all the data of all of the babies that survive abortions.”

However, as challenges to these bills will need to wait until they are signed, Swift said her organization’s current focus is Proposition 1.

Noting that criminal acts like rape, incest, or child abuse could fall into the category of “reproductive freedom,” Swift said, “I think Proposition 1 has the potential of being very dangerous to public health and encouraging the exploitation and manipulation of young women and children, especially.”

Also pointing out that under California law, abortion is already considered a constitutional right, Swift added that the amendment would not provide any new protections for women but could create many loopholes for those seeking to abuse them.

“At best, it is virtue signaling,” she said. “And at worst, it is very, very dangerous because it undoes so many laws that are designed to protect public health.”

Newsom’s office did not return an inquiry from The Epoch Times.