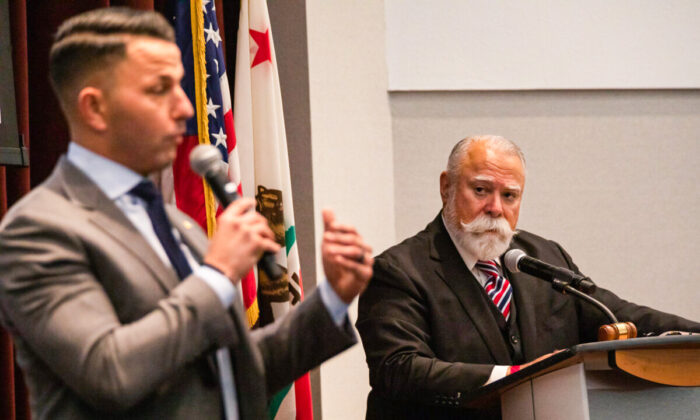 California Republican Candidates Gear Up for Primaries at Forum

YORBA LINDA, Calif.—Fourteen Republican candidates met at a “Meet the Candidates” forum on March 24 to talk about their platforms and issues that they believe matter most to voters as they prepare for California’s June primaries and the November midterm elections.

The candidates, vying for U.S. Senate, governor, attorney general, and secretary of state, are competing for party endorsements at the California Republican Party convention in Anaheim in April in the hopes of making the November ballot in California’s top-two jungle primary system.

Early, who previously ran for Congress against Adam Schiff in 2020, is currently a managing partner for a 30-lawyer law firm. He said he has been fighting against teaching critical race theory in K-12 classrooms for four years, even before the issue became widely known on a national scale.

Schools are “dividing kids by race,” and teaching them “to hate America,” Early said. They’re also taught “terrible stuff” in sex education and that “faith is a myth,” he said.

Some of those policies, he said, include Proposition 47, which increased the threshold of felony theft to $950, “emptying prisons,” and a no-cash bail system.

Early promised to do everything he could to change policies that disrespect law enforcement and have created a “criminal’s paradise.”

“And what’s remarkable is not one of those people in power say that anything I just mentioned has led to this increase in crime,” Early said.

“Election integrity is a huge issue for me,” he said. “All right, I’m going to say something you’re not supposed to say, according to the Republicans that are behind the scenes: One, I support Donald Trump, [and] two, I have no doubt that the presidential election was stolen. One of my great clients is One America News Network, and they’re under attack right now for having the audacity to say that.”

As attorney general, Early said he would assign a group of attorneys “to look into the entire election system in this state.”

Nathan Hochman, also from Los Angeles and running for attorney general, said his priorities are “safety and security.”

Hochman said that, if elected, he would use his 30 years of experience as a federal prosecutor to immediately set up task forces to deal with violent street crimes, homelessness, and fentanyl poisonings.

He promised to work closely with police to solve problems “rather than defunding the police departments and treating them as our enemies.”

Hochman said he’s raised over $1.6 million in his campaign so far. He pointed out “40 percent of that money is coming from Democrats and Independents.”

“Now, why would Democrats and Independents give a Republican a penny? I’ll tell you why: safety and security,” he said.

Two candidates at the Yorba Linda forum are competing for the chance to run against Democratic incumbent U.S. Sen. Alex Padilla, who was appointed by California Gov. Gavin Newsom to fill the vacancy left by Vice President Kamala Harris.

Dr. Cordie Williams, a chiropractor and former Marine from Carlsbad, said his campaign is focused on “medical freedom,” and exposing the collateral damage of the COVID-19 pandemic that’s not talked about in the “fake news.”

“We were told for two years that the difference between living and dying was a facial apparatus in standing or sitting or eating goldfish. That’s the collateral damage that nobody has talked about. Nobody has talked about our kids that are committing suicide, parents that are out of work and don’t know how they’re going to make it,” Williams said.

When candidates were asked about their greatest weaknesses, Williams admitted he has a few.

“I would say my weakness—well there’s several of them if you ask my wife—but probably that I haven’t spent enough time at home, probably that I don’t trust God enough. I grind it out. That’s kind of the Marine Corps mentality,” he said.

“But, I guess, the other weakness from a campaign standpoint would be that I thought the swamp was when you get to DC. I didn’t know that it was when you announce your candidacy, and you talk to consultants and strategists,” Williams said.

Referring to the American with Disabilities Act (ADA) and the Health Insurance Portability and Accountability Act (HIPPA), he said. “That’s why, in my first 30 days, I want to put forth groundbreaking legislation to remind these blue wave dictators and tyrants … what a religious or medical exemption is, because they can’t ever trample on our ADA rights and our HIPAA rights again.”

Sarah Sun Liew, an entrepreneur, pastor, and Korean immigrant from Beverly Hills with multiple Ph.D.s, professed her passion for America and traditional ways.

“I want to fight for conservative values,” she said.

Liew, cousin of billionaire Dr. John Liew, said she has self-funded her campaign with $150,000 so far and hasn’t asked for campaign donations.

She grew up in a family of educators, many with Ph.D.’s and successful businesses, she said.

“America is my hero,” she said.

As a former nurse, Liew said her greatest weakness is having “so much empathy and compassion” for people who are in pain, the poor and the homeless.

Another weakness, she said, is that she doesn’t put too much faith in other people.

The candidates promised to push back against everything from crime and political indoctrination in K-12 schools, to solving the problem of homelessness and to the exodus of people and businesses from the state.

Le Roux, a businesswoman from Redding, Calif., promised to bring balance—“something different than what’s coming out of the legislature right now,” she said.

If elected, Le Roux said she would use the governor’s “bully pulpit,” vetoes, executive orders and control over the state budget and government appointments to slow the progressive agenda.

As governor, Le Roux said she would bring balance, “something different than what’s coming out of the legislature right now.”

“So, part of my job is to work with them. Part of it is to work around them for the people,” she said.

“And, if anyone thinks that there’s only one Democratic Party in the state, pay attention. There’s two. There’s a very progressive and a more moderate party, and they don’t actually always vote together, so the veto does mean something,” she said.

Collins, a U.S. Navy veteran from Orange County whose family has a military background, said he is concerned that too many young people who’ve grown up in California are leaving the state after they graduate.

“Whenever this country needed my family, we answered the bell. We were always there ready to serve,” he said. “And so, I view me running for governor right now as an extension of my service, because I’m raising a family in this state, and everybody knows that the state is headed in the wrong direction. We’re losing this state.”

Zacky, a farmer from Los Angeles, drew attention to the water shortages in agriculture.

The state has failed to deal effectively with drought, and is “crippling our state’s economy,” he said. “We need to go and build water infrastructure, harnessing snowpack, investing in building out desalinization facilities.”

“My great grandfather started it in Los Angeles in 1928. I became the vice president of Zacky Farms after working all the way up from the ground level, and then California destroyed our business. The high costs of labor, regulations, the price of the business taxes—everything priced us out of competition,” he said.

Zacky vowed to fight against corruption by going after the “crooks and criminals that are in office right now,” he said. “I’m not afraid to fight them. We know the deep state is real, and I will expose them.”

Rachel Hamm, the sole candidate for secretary of state at the forum, said she is still upset that the Nov. 3, 2020 election “was stolen.”

Hamm, an author and speaker from Fresno who has never held a public office, said she has worked with top level cybersecurity experts and who counseled her and other “America First” candidates to become part of a coalition of Secretary of State candidates across the country.

In an interview preceding her responses to questions at the forum, Hamm told The Epoch Times she is concerned about election integrity and would like to see a forensic audit of voting machines.

“I think it is a national security issue at this point that the machines can be hacked. And therefore, we are vulnerable to other nations influencing our elections, and that is something that we must immediately investigate and take care of,” she said.

“I just want an honest election,” she said. “I’m very concerned about the lack of transparency, the lack of honesty, the lack of integrity, as are the majority of Americans.”

Hamm said she opposes ballot harvesting and vote-by-mail ballots, and she claimed that more than 22 election laws in California are “unconstitutional.” She advocates for all-paper ballots and voter I.D.

She accused the GOP establishment of running Republican In Name Only (RINO) candidates against America First candidates.

“My main issue is that the state leadership dropped in a RINO to run against me right at the last second, even though I have been campaigning and working on this for a year, and clearly was a strong candidate that could have easily gone to the primaries as the only Republican running,” Hamm said.

“I would really like to know why our own party is sabotaging its own candidates—RINOs. [President Donald] Trump did a great job of really exposing that. I appreciate it, but we still have some work to do of actually getting them out,” she said.

“There’s been a big shift in the state where before COVID, 68 percent of Californians were considering themselves to be moderate left leaning. Then, [with] the tyrannical overreaches, a lot of Democrats’ lives were devastated by what Newsom has done.”

Sky Jones, an organizer, estimated about 250 people showed up for the event hosted by Pat Nixon Republican Women Federated.

“We want people to get involved in the primary, because we want to pick the right candidates,” she said.

Many of the candidates at the Yorba Linda forum were business owners, she said.

“It’s astonishing that so many businesspeople are wanting to get involved in politics now, and it’s because their businesses are hurting,” Jones said.

Jenny Rae Le Roux won the secret ballot vote for governor, followed by Shawn Collins at the forum. Early won the popular vote for attorney general, and Williams garnered the most votes for U.S. Senate.