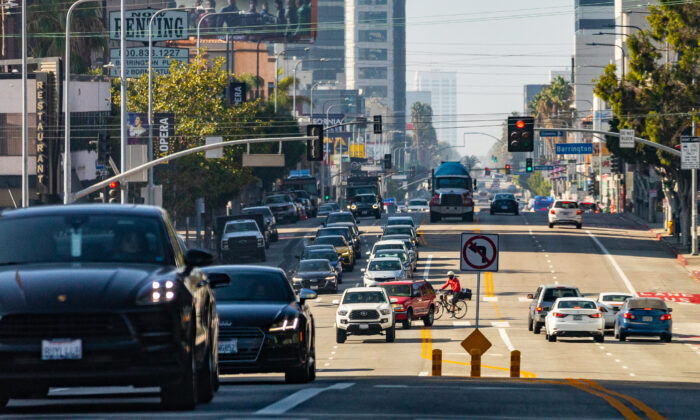 California Moves to Phase Out Gas-Powered Vehicle Sales by 2035

A proposal to phase out the sale of new gasoline-powered cars by 2035 was introduced by the California Air Resources Board (CARB) on April 12, but many say they don’t want an electric car.

The proposal requires 35 percent of vehicles sold in the 2026 model year to be zero-emission vehicles, and 68 percent by 2030.

The public hearing in consideration of the proposal is scheduled for June 9, 2022.

If approved, California will need to increase the sales of zero-emission vehicles by 8 percent per year for the first five years beginning in 2025 and 6 percent for the following five years to reach 100 percent in 2035.

“California is already experiencing the effects of climate change, and it is expected that these effects will worsen in the coming decades, particularly if actions are not taken to mitigate greenhouse gas emissions,” the proposal stated.

Although electric vehicles have gained popularity in recent years, the majority of Americans indicate they do not want an electric car for their next vehicle.

According to the 2022 Deloitte Global Automotive Consumer Study (pdf), approximately 69 percent of Americans surveyed indicated they do not want an electric or hybrid car as their next vehicle. The reasons being the driving range per charge, lack of public electric vehicle charging infrastructure, and the high cost.

The key reasons for those who chose electric or hybrid cars include low fuel costs and concern about emissions relating to climate change. If the electricity used for mobility was priced similar to current fossil fuels, about 31 percent said they will not purchase an electric vehicle, according to the study.

However, researchers at the U.S. Department of Energy’s National Renewable Energy Laboratory conducted an analysis suggesting that an electric car’s average lifetime fuel cost saving is between $3,000 to $10,500, excluding the equipment cost and the installation fee of the charging station.

Those who want to find out their annual fuel or electricity costs can use the U.S. Department of Energy vehicle cost calculator for an estimated cost.

“We just can’t afford it. If we can, we will buy a hybrid car. A hybrid car makes me feel more secure,” said Hannah Zhao, a stay-home mom living in Walnut, Calif.

Zhao told The Epoch Times that she hesitated on buying an electric car because of the lack of charging infrastructure, as it will be inconvenient if she goes on a long-distance trip.

Sharon Koumans, a resident of Temecula, said she never thought about buying an electric or hybrid car because she is getting used to driving conventional cars.

“We mostly work from home. We only go out for essential businesses. Electric cars are nice but we just don’t know much about it. Like how much does it cost for maintenance? It reduces carbon emission, but will the battery pollute the environment,” Koumans told The Epoch Times.

Lucas Huang, a civil engineer who owns a Honda Accord, said he would prefer a hybrid car more than an electric car for his next vehicle rather than an electric because it doesn’t rely on charging stations.

“I have thought about buying a fuel-efficient car due to the recent high gasoline costs. But I will wait for a year or two. A hybrid car will definitely be my top choice,” said Huang.

On the other hand, the state’s proposal was just not enough for some.

Following the release of the new proposal, the Center for Biological Diversity issued a statement condemning the plan as “inadequate progress” toward 100 percent zero-emission vehicles.

“The nation needs strong rules from California that force auto companies to make the electric vehicles we need. California has to lead on clean cars, or we’ll all be left choking in the dust,” said Scott Hochberg, a transportation attorney at the Center for Biological Diversity’s Climate Law Institute.

Additionally, the center urges the state to impose a much more aggressive rule and reach 100 percent zero-emission vehicle sales by 2030.