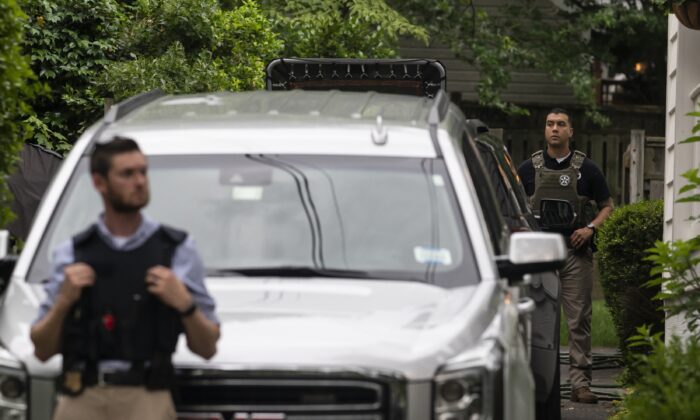 A California man arrested near the Maryland home of a Supreme Court justice on June 8 told a dispatcher that he flew across the country to kill the justice, according to audio from a 911 call.

“I am having … thoughts,” Nicholas John Roske, the California man, told the dispatcher around 1 a.m, according to the call, which was obtained by The Epoch Times. “I’ve been having them for a long time. I’m from California. I came over here to act on them.”

Roske was standing near the home of Supreme Court Justice Brett Kavanaugh in Chevy Chase.

He said he brought a gun with him but it was unloaded and locked in a case. He had not consumed alcohol or drugs.

“Do you need medical attention?” the dispatcher asked. “I need psychiatric help.”

In his first court appearance following his arrest, Roske said he’d taken medications prescribed by a doctor and “wouldn’t say I’m thinking clearly.” He’s being held because his lawyer decided not to try, for now, for pretrial release.

Back on the phone before he was arrested, Roske said he had other weapons with him, including pepper spray and a knife, and that he had just traveled from the airport to the suburban neighborhood just outside of Washington. According to court documents, Roske had burglary tools and planned to break into Kavanaugh’s home when he exited a taxi, but walked down the street when he saw two deputy U.S. Marshals.

“And you said you came from California. Do you know someone down here?” the dispatcher asked. “Brett Kavanaugh. The Supreme Court justice,” Roske said.

“What were you coming to do? Just to hurt yourself and him, or what was going to happen?” the dispatcher asked. “Correct,” Roske said.

He soon hung up because he said officers had arrived.

The audio was obtained from the Montgomery County Police Department by The Epoch Times.

While Roske didn’t move towards Kavanaugh’s home after seeing the officers and called 911 on himself, case law “says stopping because you spotted officers that might thwart your plan is just irrelevant,”  Orin Kerr, a law professor at University of California, Berkeley, School of Law, wrote on Twitter. He cited the federal appeals court that covers Maryland, which ruled in another case that “the fact that police presence ultimately caused [a man] to forego completion of the crime in no way establishes an abandonment of the attempt.”

Roske, per an affidavit filed in support of an attempted murder charge against the man, waived his right to remain silent and have an attorney present after being arrested. He told officers that he flew to Maryland because he was upset about the recently leaked Supreme Court draft decision that indicated the court is poised to strike down Roe v. Wade, the ruling that said access to abortion is a constitutional right.

Roske also said he thought Kavanaugh would be one of the votes to “loosen gun control laws.” The court is considering a case that concerns the legality of a New York law that requires people who want a concealed carry license to prove they have “proper cause.” During oral arguments, justices seemed receptive to arguments against the law.

Roske, who faces up to 20 years in prison, found the address of Kavanaugh on the Internet and bought a gun and other items, including two magazines and ammunition, for the purpose of murdering the justice, according to charging documents. On the call, Roske said he saw an article that contained a picture of Kavanaugh’s home and “cross referenced it” with other information.

Roske said he was diagnosed with an issue without appearing to name what the issue was and that he had been “hospitalized multiple times.” He said he lived with his parents in California and did not have any children. FBI agents raided the home in Simi Valley following Roske’s arrest.