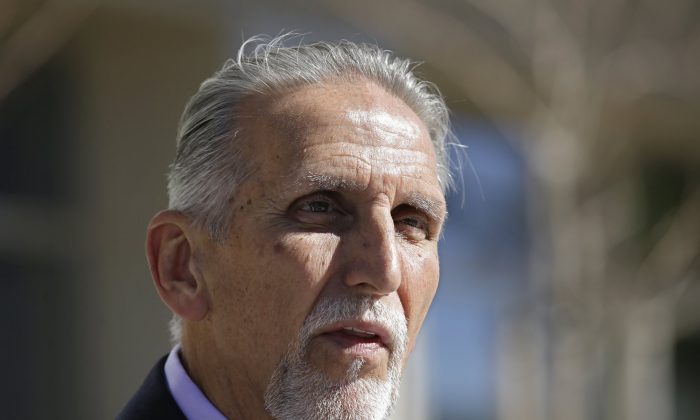 Craig Coley talks with reporters in Sacramento, Calif. Coley spent 39 years in prison for a murder he didn't commit on Feb. 15, 2018. (Rich Pedroncelli/AP)
US News

California Man Cleared After 40 Years in Prison Gets $21M

SIMI VALLEY, Calif.—The city of Simi Valley, California, has reached a $21 million settlement with a man wrongly imprisoned for nearly 40 years in the killing of his girlfriend and her 4-year-old son.

A photo of Craig Coley being arrested by Rick Freeman of the Simi Valley Police Department in 1978 had hung on the wall at the station as a part of a display of the department’s history. Coley, who served more than 38 years in prison for a double murder, was pardoned in November pic.twitter.com/u82OPtBjCQ

Craig Coley was released in 2017 after he was pardoned by then-Gov. Jerry Brown, who said DNA evidence and re-investigation proved Coley’s innocence.

“While no amount of money can make up for what happened to Mr. Coley, settling this case is the right thing to do for Mr. Coley and our community,” City Manager Eric Levitt said in a statement.

The city will pay about $4.9 million and the rest is expected to be paid by insurance and other sources.

The state last year approved a separate, nearly $2 million payment for Coley. He is now 71.

Coley spent 39 years behind bars after he was wrongly convicted of killing 24-year-old Rhonda Wicht of Simi Valley and her son in 1978.

Craig Richard Coley, who was released from prison in November 2017 at the age of 70, agreed to … https://t.co/24IS6IjaA2 @MailOnline

The city’s police chief and Ventura County’s district attorney asked Brown to pardon him because forensic tests showed Coley’s DNA was not on the victim’s bedsheet, which contained DNA from an unknown man. Coley had an alibi for the time of the slayings and investigators later disproved testimony from an eyewitness who placed him at the scene.

His parents died while he was in prison after mortgaging their home to pay his legal bills.

Ron Kaye, an attorney representing Coley, said the settlement offers some closure and vindication for his client, though no amount of money can compensate him for the life he missed while imprisoned.

Craig Coley was pardoned last year after spending nearly four decades in prison. He just hosted Thanksgiving for the first time in his new home — celebrating with the detective who advocated for his freedom.@PattersonNBC shares their story. pic.twitter.com/nAkJeQr2yK

“He now can live the rest of his life, which we hope will be really well into the future, with the security he deserves,” Kaye said.

Soon after Coley was pardoned, a judge declared him factually innocent. Simi Valley police have not arrested anyone else in the killings.

Thank you @JerryBrownGov for exonerating Craig Coley – and for seeing that he gets just compensation. Everyone at @CA_Innocence – including the mothers and fathers of the wrongfully convicted – are counting on you to #FreeTheCA12 @GovPressOffice @FreeCA12 @JustinoBrooks pic.twitter.com/5iWSoYuPl2