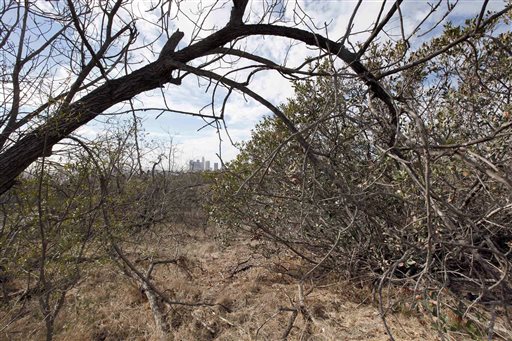 Downtown Los Angeles is seen in the distance through dry brush at Griffith park on Monday, Dec 16, 2013. Many cities in California closed out 2013 as the driest year since record-keeping began more than a century ago. (AP Photo/Nick Ut,File)
US

The California drought wreaked havoc on the state in 2013, and it is still worsening, worrying farmers and other residents.

He had to import loads of hay; as he was speaking, his herd of Angus cattle went to eat hay from a load that cost $6,000.

The drought map of the state ” looks as if it has been set on fire and scorched in the center,” the Mercury News declared. The lack of rainfall has set records, including in San Jose, where it has rained only 3.8 inches since January 2013, compared with its 14 inch average. The previous record low was 6.04 inches.

Downtown Los Angeles received a meager 3.60 inches of rain since Jan. 1, the driest calendar year since 1877. Normally, downtown would be soaked with about 15 inches of precipitation.

Nearly 95 percent of the state is in drought, according to the latest map.

The U.S. Drought Monitor said that because of “longer-term rainfall deficits (2.0 – 8.0 inches below normal) during the past 180 days and 10-20 percent of normal during the past 90 days, the drought depiction including extreme drought was not modified.”

In fact, the “severe drought” was expanded slightly across northern California over the last several weeks.

The lack of rainfall is impacting many cities, such as Folsom, which has ordered mandatory water conservation measures after its reservoir is at a record low. These mandatory measures may be ordered soon for Sacramento, a city with almost 500,000 residents.

“It’s been pitiful,” said Bob Benjamin, a forecaster for the National Weather Service in Monterey, Calif. “It’s a concern, but we do have several months to catch up.”

The worst part is–the long-term outlook for California calls for the drought to persist or intensify.

The drought has been so bad that in Folsom Lake, which is experiencing historically low water levels, the remains of a Gold-Rush era mining town that flooded decades ago have been exposed.

Remnants of the town of Mormon Island have been uncovered by the lake’s receding waters, drawing people out to the lakebed in search of artifacts, The Sacramento Bee reported.

Many of the state’s major reservoirs are below average for the month.

Shasta Lake, the state’s largest reservoir, is currently at 37 percent of its total capacity. Folsom Lake recently dipped below 20 percent of its capacity, marking a historic low for the month. This triggered some communities in the Sacramento-San Joaquin Delta region to issue water conservation orders.

Even before the state was gripped by record dryness, several cities, including Santa Monica and Long Beach in Southern California, have planned to reduce their dependence on imported water in the coming years by maximizing groundwater supplies, harvesting stormwater and increasing recycled water distribution.

Despite an arid year, forecasters said the rainy season is not over yet. In past years, a dry December gave way to storms in January.

“Or we can get a miracle March that bails us out a little bit,” said state climatologist Michael Anderson.