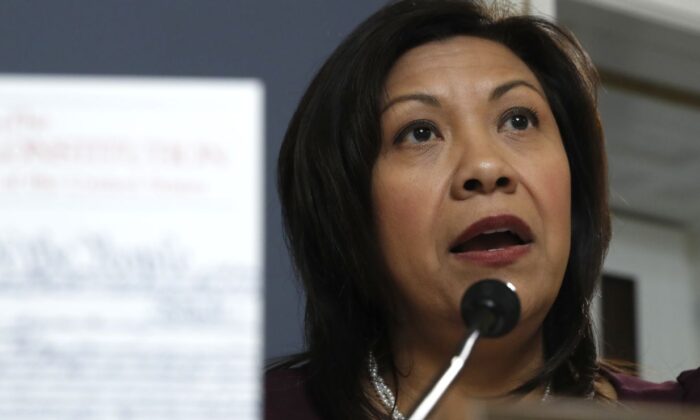 California Democrat Rep. Says She Sleeps With Gun Next to Bed After Death Threats

A Democratic U.S. House member from California said she now sleeps with a gun next to her bed after receiving death threats following comments she made that were critical of the governments of El Salvador, Honduras, and Guatemala.

Rep. Norma Torres (D-Calif.), who was born in Guatemala and came to the United States as a child, says people have staked out her house after she lambasted the three Central American countries’ governments for official corruption and not doing enough to help their citizens.

Speaking to the Los Angeles Times last week, the California lawmaker said El Salvador President Nayib Bukele created a campaign to flood her district with calls and harass her staffers. Her social media pages may have also been targeted, with supporters of Bukele allegedly sending her hateful images, negative messages, and death threats, Torres said, adding that she now sleeps with a gun nearby.

“I never thought it would get to this point, but I have to protect myself in my home,” Torres said, according to Fox Los Angeles.

On March 31, she wrote a comment on Twitter that was critical of the governments of Honduras, El Salvador, and Guatemala—collectively known as the “Northern Triangle”—stating their policies’ are forcing citizens to migrate.

“This is a great shame to the governments of #Guatemala#Honduras#ElSalvador your compatriots deserve governments that are truly committed to fighting corruption and drug trafficking!” Torres wrote on March 31, according to a Spanish-to-English translation while linking to a story about smugglers who dropped a 3-year-old and 5-year-old child from the U.S.–Mexico border wall.

It drew a response from Bukele, who suggested Torres got her facts wrong.

“Look ma’am, did you read that the children are from ECUADOR and not from EL SALVADOR? In addition, this occurred on the border of Mexico with the United States. What does El Salvador have to do with this? You should use a portion of your financier’s check to buy glasses,” Bukele responded a day later, according to a translation.

Torres panned Bukele’s policies on that same day, likening him to “narcissistic dictators,” linking to an article about migrants from El Salvador having drowned in Mexico.

Neither Torres’s office nor the El Salvador embassy in Washington responded to a request for comment by press time.

The Biden administration has come under bipartisan fire in recent weeks for what critics have called a failure to handle the border crisis.

According to data from U.S. Customs and Border Protection, agents witnessed more than 178,000 attempted illegal crossings in April. A wave of unaccompanied children attempting to cross the border has prompted the administration to open new Border Patrol and Department of Health and Human Services facilities to house them.