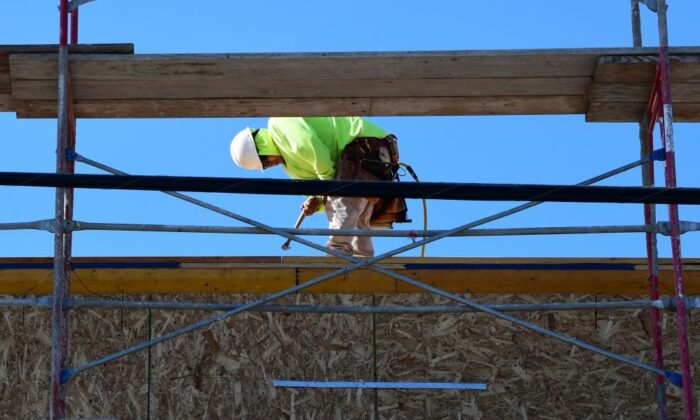 A file photo of a construction worker on a site in Los Angeles, Calif., on April 23, 2020. (Frederic J. Brown/AFP via Getty Images)
Southern California

Jack Bradley
Jack Bradley is a daily news reporter for The Epoch Times based in Southern California.
View profile
Follow
and Siyamak Khorrami

A California law meant to protect workers from labor law infractions is being used by attorneys to take advantage of small businesses, says Tom Manzo, a small-business owner and founder of the California Business and Industrial Alliance.

Manzo told The Epoch Times that lawyers are using the Private Attorneys General Act (PAGA) to latch onto minor labor law infractions and sue businesses for large sums of money.

The labor law digest used to determine violations is more than 1,100 pages long, making it almost impossible to be fully compliant, he said.

“If somebody is violating a labor law, like they’re not paying minimum wage, or they’re not paying overtime, then, yeah, for sure, they should be punished without a doubt,” Manzo said. Yet violations may include misspelling a name on a pay stub, having employees take late lunch breaks, or rounding when employees clock in and out.

If business owners want to give employees bonuses, they must recalculate the workers’ overtime rates and reflect that on the pay stubs, Manzo said. “If you don’t do that, that’s a violation, and a lot of people end up getting hit over that.”

Mistakes such as these can cost an employer “hundreds of thousands of dollars in one of these lawsuits,” Manzo said. Most of that money goes to the lawyers, Manzo said, and sometimes the employees only get a few hundred dollars.

PAGA was signed into law in 2004 under Gov. Gray Davis. According to the state’s Department of Industrial Relations, the law allows aggrieved employees to file civil lawsuits for labor code violations.

“They could deputize a private citizen to step in the shoes of the attorney general,” Manzo said.

Manzo said out-of-court settlements are almost always reached in these cases, and some settle for millions of dollars. The settlement is then distributed among three parties: the employees, the state government, and the attorneys.

The attorneys get their cut, and then everything else is negotiated, Manzo said. The attorneys in almost all instances receive from 33 to 40 percent of the total settlement.

A Case in Point

Manzo runs a midsize manufacturing business that employs more than 200 people. He said one of his employees brought a PAGA case against the company over late lunches, which ended up costing nearly $1 million in settlement fees.

“We had a legal counsel, and we also had an HR [human resources] consultant. And nobody sat down and said to us, ‘You know, if you take lunches later than five hours, it could cost you a lot of money,’” Manzo said.

Now, there is no longer a flexible work schedule at his company. Every employee must start at a certain time and take his or her lunch at a determined time.

“When they did take their lunches, we never made them clock in or clock out. We’re not taking any chances whatsoever at this point.”

Confidentiality agreements following the settlement require all parties “to be quiet about it,” Manzo said. “All of this is done in mediation, behind closed doors.”

For this reason, he thinks the problem of attorneys abusing PAGA isn’t well known.

Before filing a lawsuit, he recommends that employees communicate their concerns with their employers instead. Most employers would gladly correct these issues if they could, he said. It would save some of them hundreds of thousands of dollars.

Los Angeles attorney Glenn Danas has worked on PAGA cases and wrote a defense of PAGA last year. Among his arguments in favor of PAGA is the fact that amendments have been included over the years to protect employers from frivolous cases.

He wrote about “cure provisions allowing employers the option to cure certain technical violations, such as certain types of wage statement violations, before the plaintiff may file suit.”

Manzo said the cure provisions are practically useless for employers.

They only apply to some types of violations, and an employer can only cure one violation within the 33-day period. A PAGA action may involve a couple or more technical violations. It’s also difficult to “cure,” because it can mean, for example, revising all pay stubs for all employees going back three years.

“It becomes almost impossible to comply with the fix. You just don’t have the time,” Manzo said. “It’s expensive to go back. I mean think about if you had 100 or 200 employees and 50 of them no longer work for you anymore. … Say they were paid weekly for the last three years.” That could mean tens of thousands of stubs to rework.

Ivan Muñoz, editor-in-chief of The Santa Clara Law Review, published an article in July stating: “In 2020 and perhaps beyond, PAGA will confront its most threatening challenge to date in CABIA v. Xavier Becerra. Regardless of the outcome at the trial court level, observers and the business community can expect an appeal.

“As the alleged causes of action raise important constitutional challenges, the case may reach the California Supreme
Court.”

Muñoz said the state depends on PAGA to enforce the labor code, and “the California Legislature would have an enormous task of ensuring proper enforcement of the labor code, in hopes of avoiding the pre-2004 enforcement reality that led to PAGA’s enactment.”

The state collects a “substantial sum of money from PAGA actions,” he said. However, without PAGA, the state might be able to cut out the large attorney’s share of the settlements and “collect the full amount of available penalties.”