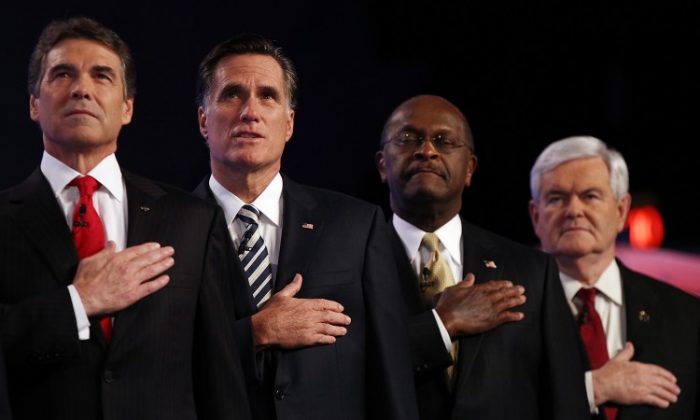 Republican presidential candidates (L-R) Texas Gov. Rick Perry, former Massachusetts Gov. Mitt Romney, former CEO of Godfather's Pizza Herman Cain and former Speaker of the House Newt Gingrich place their hands over their hearts during the national anthem prior to a debate at Constitution Hall in D.C. Nov. 22. Since Cain announced suspension of his campaign on Saturday, others in the field will await his choice for endorsement. (Win McNamee/Getty Images)
US

Former presidential hopeful and Godfather’s Pizza CEO Herman Cain announced Saturday that he would suspend his presidential campaign, citing the distraction of numerous sexual harassment allegations against him and the claim of a 13-year affair, and the negative impact the accusations have had on his family.

“So, as of today, with a lot of prayer and soul searching, I am suspending my presidential campaign. I am suspending my presidential campaign because of the continued distraction, the continued hurt caused on me and my family, not because we are not fighters, not because I’m not a fighter,” said Cain during a much-anticipated televised announcement.

“It’s just that when I went through this reassessment of the impact on my family first, the impact on you, my supporters, your support has been unwavering and undying, as well as the impact on the ability to continue to raise the necessary funds to be competitive, we had to come to this conclusion.”

After the announcement, the other Republican candidates heaped praise on Cain, hopeful of garnering his endorsement. Cain has not yet announced his choice, but said that it would happen “soon.”

Under Federal Election Commission (FEC) rules, a suspension, as opposed to an outright termination of Cain’s campaign, allows him the flexibility to continue to raise money and solicit contributions, and transfer leftover funds from his campaign to another candidate or PAC of his choice.

Despite what were described as “gaffes” in campaign responses to questions, and sexual allegations that have impacted the Cain campaign in recent weeks, he still maintains a significant base of supporters, whom the other candidates are eager to court.

“Beginning yesterday, our office had call after call after call of people who wanted to switch over and come and support me, because people realize that I’m the true Tea Party candidate in the race,” said Minnesota Congresswoman Michele Bachmann on Fox News Sunday.

Texas Congressman Ron Paul expected Cain supporters to fall in line behind him due to his Tea Party and limited government credentials, while Rick Santorum predicted that he would now have a good chance of winning the Iowa Caucus.

Bold predictions aside, the individual who appears to have benefited most from Cain’s recent fall in the polls has been Newt Gingrich. The former speaker of the House now sits atop the polls in Iowa: A Des Moines Register poll conducted Nov. 27-30 concluded that Gingrich has 25 percent support among likely caucus participants, compared to 18 percent for Ron Paul and 16 percent for former Massachusetts Gov. Mitt Romney.

Currently, with about a month left to go before the Iowa Caucus, the GOP primary is shaping up to be a two-horse race between Gingrich and Romney.

Some experts view Romney to be the establishment favorite, and current polling suggests that he has the best chance of beating President Barack Obama in a general election, despite accusations by supporters and critics of “flip-flopping” on major issues.

Gingrich is perceived to be the latest in a long line of “conservative” alternatives to Romney–a list that includes Cain himself, Bachmann, and Texas Gov. Rick Perry.