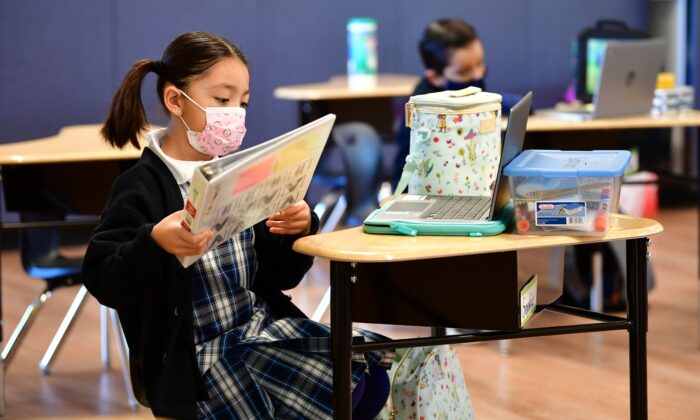 The head of a local California teachers’ union has come under fire in recent days after a video showed him taking his 2-year-old daughter to a private preschool for in-person instruction—as public schools remain closed in many cities across the state.

A group of Berkeley-area parents known as Guerrilla Momz posted the video on YouTube on Feb. 27 and wrote: “Matt Meyer Berkeley Federation of Teachers president blocks opening public schools in-person, yet has had his own child in in-person school since June 2020. Stop the hypocrisy. Our children are suffering. Open schools full-time Now.”

Meyer appeared to confirm the incident to Fox News and other news outlets. He told Fox News that the video of his child, who was blurred out, was “very inappropriate” and an intrusion on her privacy.

There are currently “no public options for kids her age,” he said.

“There are major differences in running a small preschool and a 10,000-student public school district in terms of size, facilities, public health guidance, and services that legally have to be provided,” Meyer said.

“We all want a safe return to school. The Berkeley Federation of Teachers is excited that Berkeley Unified will be reopening soon with a plan, supported by our members and the district, to get our students back in classrooms starting later this month.”

Union officials didn’t immediately respond to a request by The Epoch Times for comment.

The Berkeley Unified School District reached an agreement with the Berkeley Federation of Teachers in February to reopen public schools in March and April, according to a statement. It depends on whether staff members get COVID-19 vaccinations.

Jonathan Zachreson, with a Guerilla Momz-affiliated group called Reopen California Schools, told KNTV in the Bay Area that the video suggests that parents are becoming increasingly frustrated with schools being locked down amid the CCP virus pandemic.

“It’s really a message of hypocrisy where we see this union representative saying it’s not safe to go back, yet he feels safe enough to take his daughter to an in-person institution,” he said.

In recent days, there have been protests by parents and students in other parts of California calling for public schools to be reopened. Parents have said that in-person learning is necessary for a child’s development, saying that virtual learning, which has been pushed since the start of the pandemic, is insufficient.

“For me, you don’t need to attack people personally, you need to address it politically. When you start getting personal, you mix up dimensions, and you don’t get to discuss the real thing,” Kolesas stated. “Here, the real thing is [Meyer] put fear before science, and the right of teachers before the right of kids. That’s the issue.”